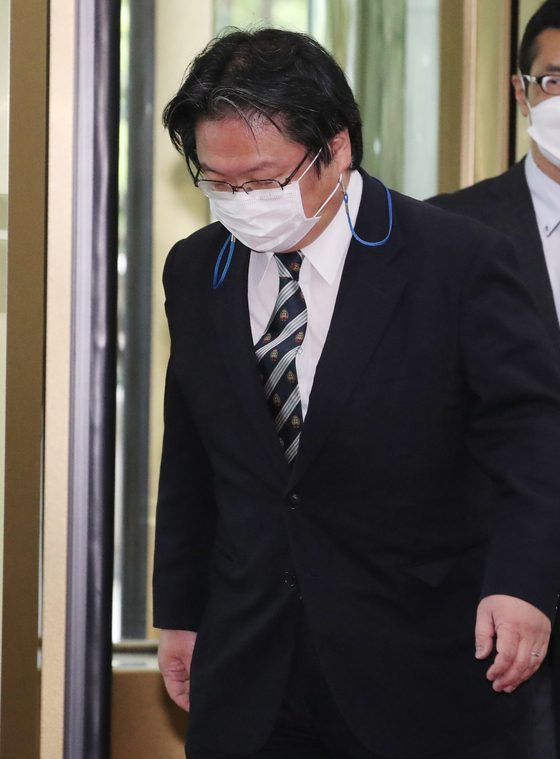 Hirohisa Soma, deputy chief of mission at the Japanese Embassy, is summoned to the Ministry of Foreign Affairs in central Seoul on July 13 over an earlier contretemps after Tokyo renewed claims over Korea’s easternmost Dokdo islets in its annual defense white paper for the 17th consecutive year. [YONHAP]

Japan’s deputy chief of mission in Korea reportedly described President Moon Jae-in’s efforts to hold a Korea-Japan summit during the Tokyo Olympics as masturbatory in a conversation with a JTBC reporter on Friday.

Soma added that Japan “does not have the time to care so much about the relationship between the two countries as Korea thinks.”

“The conversation took place [in a casual meeting,] not a public press event, but we decided to run a report because we felt the remarks were not appropriate,” JTBC reported.

“I was told by Soma that it was true that he used the expression that has been reported in the news, but that this was never a statement about President Moon Jae-in, and that Soma withdrew it after saying it, stating it was an inappropriate remark,” Aiboshi said.

“Nonetheless, what Soma said was extremely inappropriate coming from a diplomat and I am very regretful for it,” he said.

Aiboshi added that Soma was reprimanded.

“We have asked the Japanese government to take prompt and appropriate measure to prevent the recurrence of such an incident,” the ministry said in a statement.

The incident worsened the already frayed relations between Japan and Korea over territorial and historical issues.

They include the issue of wartime sexual slavery and forced labor victims dating back to the time of Japanese occupation of Korea (1910-1945), Japan's export restrictions on Korea and Tokyo's planned discharge of contaminated water from the Fukushima power plant into the Pacific Ocean.

The two sides have also clashed over territorial claims over Korea's Dokdo islets in the East Sea.

Earlier this month, Soma was summoned to the Foreign Ministry in central Seoul when Japan renewed claims over Korea's easternmost Dokdo islets in its annual defense white paper for the 17th consecutive year.

The idea of Moon traveling to Tokyo for a summit has been floated in the press in both countries in recent weeks. The Yomiuri Shimbun and Sankei Shimbun reported last month that Korea approached Japan with a proposal for Moon to attend the Olympics and hold a summit with Japan’s Prime Minister Yoshihide Suga.

These reports have been denied by the Korean government. The Foreign Ministry expressed "strong regret" last week over such leaks about a possible summit, noting the consultation process could be hindered unless Tokyo "responds prudently."

Given that at least three days of quarantine is required for official participants to the Tokyo Olympics, which starts this Friday, a decision on the summit is likely to be finalized by Tuesday at latest, if Korea intends to send the president, prime minister, or a government representative to attend the opening ceremony.