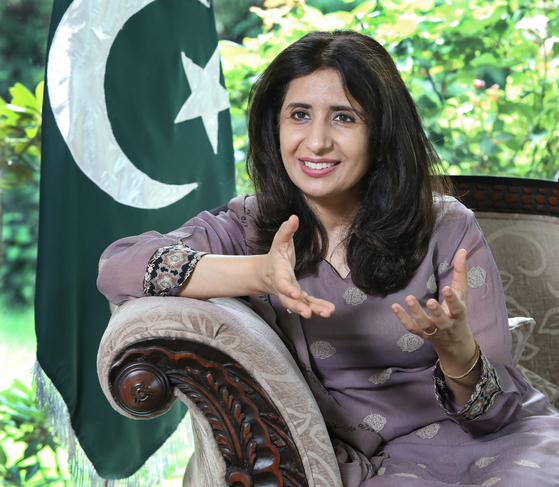 Ambassador of Pakistan to Korea Mumtaz Zahra Baloch speaks with the Korea JoongAng Daily at the diplomatic residence in Seoul on June 30. [PARK SANG-MOON]

Mumtaz Zahra Baloch speaks of constant learning on the job

Starting a new diplomatic posting in the midst of a pandemic is no easy feat.

Mumtaz Zahra Baloch, ambassador of Pakistan to Korea, arrived in Seoul in early 2020, just as the number of daily cases were starting to pick up.

“Especially in the beginning stage of the pandemic, we didn't have full knowledge on how exactly the virus was spreading, and I think that was one of the biggest factors that put everything on freeze,” said Baloch, speaking to the Korea JoongAng Daily at her residence in Seoul on June 30.

But once the Korean government had set out the social distancing guidelines, Baloch had the parameters to make decisions about her new role in Korea. This has meant virtual meetings with Pakistani residents in Korea — who number around 17,000 — as well as small-group meetings with her Korean counterparts and stakeholders in the public and private sectors to keep people-to-people diplomacy alive.

“Wherever I am posted, I try to interact with the locals, and with the Pakistani communities, and the feedback from the community here has been very positive,” said Baloch. “They say they have been welcomed here, they feel at home, and that the system does not discriminate — that the government institutions and laws have a good outlook toward foreigners.” 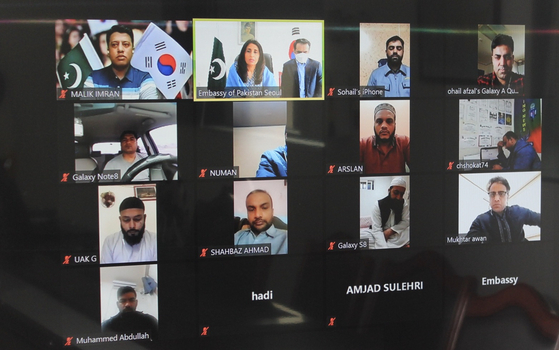 The Embassy of Pakistan's online forum for Pakistani workers in Korea to offer them an opportunity to engage with the ambassador on March 28. [TWITTER ACCOUNT OF EMBASSY OF PAKISTAN IN KOREA]

In her meetings with Korea’s Minister for Economy and Finance Yoon Tae-sik, teams at K-Water which is working on hydropower projects in Pakistan, and members of the agricultural agencies and economic research institutes in Korea, Baloch said she found a growing desire between the two nations to collaborate on trade and development.

The two nations signed a trade agreement in 1968, 12 years before Pakistan opened a consulate general in Seoul. Official diplomatic ties were established in 1983.

Trade between the two nations accounted for $10 million in 1983 and grew to $1.4 billion by 2018, according to the Korean Embassy in Pakistan.

Korean companies including Lotte Chemical, Lotte Confectionery, Samsung Electronics and LG Electronics have been working in Pakistan for over a decade now.

Infrastructure projects, including development of hydropower plants, followed, led by Korea Hydro & Nuclear Power and Korea South-East Power among other companies. Korea built Pakistan’s first highway in 1997, which connects Lahore with Islamabad.
“The Daewoo Transport [which built the highway] is operating the biggest public transportation system in Pakistan, and an inter-city bus system, so if I had to travel between two cities, I would choose this option,” said Baloch. 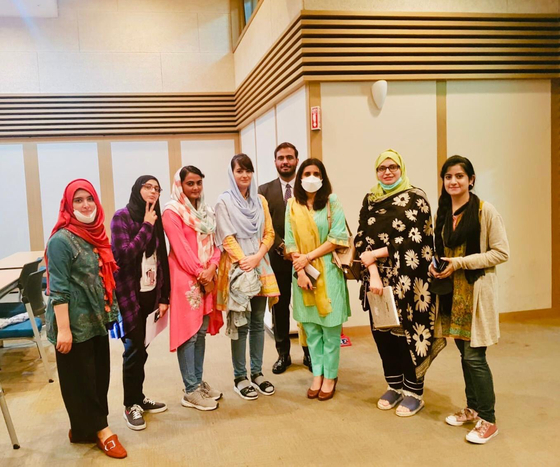 Ambassador Baloch, third from right, with Pakistani students in Korea on Aug. 2, 2020. [TWITTER ACCOUNT OF EMBASSY OF PAKISTAN IN KOREA]

Just as Koreans travel across the nation during Chuseok and Seollal to see family members, Pakistanis do the same during Eid.

“What I have found to be very interesting about Korean culture is the place the family holds in your lives — it is very similar to what we have in Pakistan,” Baloch said. “We rely on each other through the good times and the bad times. And that is one of the aspects about Korea that makes me really feel at home.”

Another aspect, she added, is kimchi.

“We have something called achar in Pakistan, that is of course not the same as kimchi — we use different spices — but the process of making it is quite similar, through fermentation,” said Baloch. “I am learning every day that the culture and lifestyle of Koreans is much more intense and vibrant than I had known before. Learning never ends.” 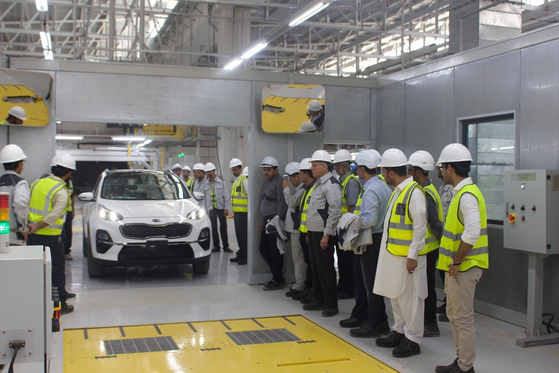 A Kia car being produced at factory of Lucky Motor Corporation Ltd., as part of the partnership between YB Group and Kia Motors in Pakistan. [EMBASSY OF PAKISTAN IN KOREA]

Young people in Pakistan and Korea may speak different languages, drink different teas, and listen to different music, but when it comes to their expressions of freedom and independence, they may be more similar than they outwardly appear.

“Young people just out of college and starting their jobs may start with a second-hand small car, or a motorbike,” said Mumtaz Zahra Baloch, ambassador of Pakistan to Korea. “Then, as the family grows, or as they move up in their careers, they may be able to afford bigger and more luxurious cars. In some ways, owning your own car is a dream — and everybody has dreams.”

And some of those dreams have been realized recently with Korean cars.

“Kia has the No.1 spot in terms of market share among new entrants in Pakistan under the ADP [automotive development policy] 2016-2021,” said Asif Rizvi, CEO of Lucky Motor Corporation Ltd., a partnership between YB Group and Kia Motors in Pakistan.

Rizvi, speaking to the Korea JoongAng Daily over a written correspondence earlier this month, was referring to the Pakistani government’s scheme announced in 2016 to attract new auto brands and manufacturers into the country by reducing the entry barriers for doing business.

Amongst the new entrants was Kia — which was not throwing its hat into the ring for the first time, actually.

Kia had assembled cars in Pakistan from 1999 to 2004. Its attempt ended with its Pakistani partner filing for bankruptcy.

This time, the Korean carmaker opened a factory in Karachi, a southern coastal city, in July 2019, in partnership with YB Group. Hyundai Motor, Kia’s parent company, followed a year after, opening a factory in Faisalabad, south of Islamabad.

The news has been well received among Pakistanis, who were ready for more options in SUVs and hatchbacks. For three decades, Japanese carmakers have dominated the automotive industry in Pakistan.

“The cars from Korea have come in a big wave, and they have re-invigorated the market, as over time, customers in Pakistan felt they needed more variety,” said Baloch, speaking to the Korea JoongAng Daily at her residence in Seoul on June 30.

Individual vehicles — in the form of four-wheelers as well as two-wheelers — are a more desired mode of transportation for many people in Pakistan, which has a landmass eight times that of Korea, with a public transportation system that is not as highly connected as here.

Kia’s Picanto 1000cc hatchback is amongst the most popular models, especially for small-sized families and first-time buyers, according to Rizvi.

“Kia cars are manufactured in two categories — small hatchback and SUVs,” he said. “The Picanto is popular for its style and durability. The Sportage is a trend setter in Pakistan and has opened up a completely new segment of mid-sized SUV which was non-existent before.”

The effects of climate change has been felt in the automotive industry and the ecosystem in Pakistan is no exception.

“We are just beginning to work on green energy transformation — the government came up with electric vehicle [EV] policies two years ago,” said Baloch. “But we also understand that this process of transformation to renewables can take time, especially for developing nations. But it is our definitive goal, as Pakistan is among the top 10 nations in the world most affected by climate change.”

To hear more about Pakistan and Korea's cooperation in the automotive industry and green energy transformation and how they fit within the larger framework of bilateral economic ties, the Korea JoongAng Daily recently sat down with Ambassador Baloch. The interview with Rizvi was conducted separately via email. 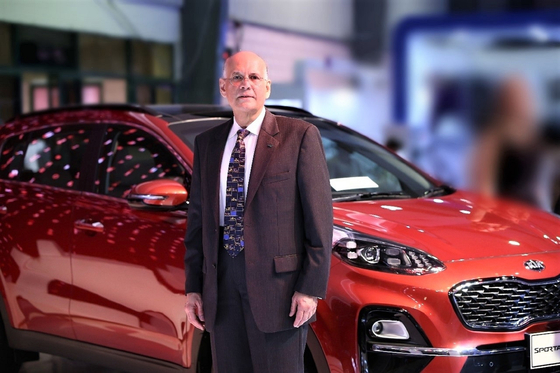 
We understand that Pakistan's economy, like other economies, has been hit hard by the Covid-19 pandemic. Has it impacted the schedule for switching to EVs?
Baloch: Last year was a tough year for many countries, and some have postponed the targets they’ve set. But moving to green energy and renewables, including the production of EVs, is a priority for Pakistan, even though it may take time. When we speak of green energy transformation, we’re not just talking about changing from one energy source to another, we’re speaking about changing the whole ecosystem of energy resources, re-training people who are in the supply chain and ensuring you have the electricity grid and other infrastructure needed for the transfer. We are speaking of long-term projects, and we are committed.

This is not the first attempt by Kia to produce cars in Pakistan. What vision does Kia and Lucky Motor share going forward?
Rizvi: On the one hand Kia is eager to increase its global market share by offering excellently styled cars and having the most modern features at the best value for money. On the other hand Lucky Motor, with a very strong local footprint, is keen to learn from Kia and the Korean people to establish itself as the leading car manufacturer in Pakistan, with the best range of products, manufactured to the highest standards of quality.

We have ample opportunities to grow, as Pakistan [has] a very low motorization ratio. As the per capita income in Pakistan is increasing, so is the buying power of people and car sales.


Pakistan and Korea established diplomatic ties in 1983, but it could be said that the two nations’ economic ties date back years before that, as they had signed an agreement in 1968 to designate major export items as bilateral trade. We understand there have been ongoing talks to establish a free trade agreement (FTA) between the two nations in recent years — can you tell us more?
Baloch: Our trade relations have long been complementary. Pakistan exports cotton, petroleum, knitted clothing, seafood, beverages and salt, among other goods to Korea, and Korea exports to Pakistan vehicles, iron and steel, plastic, mineral fuel and oil, dye extracts, machinery, organic chemicals and other chemical products, among others.

But the trade level between our two countries is not up to the potential that experts on both sides believe is there. So we have been discussing how to upgrade our relationship and expand bilateral trade.

As for the FTA, the feasibility study was done by both Pakistan and Korea a couple of years ago, which yielded very promising results. It has become apparent that the two nations’ FTA will provide a win-win result for both and we are in the process of taking our next steps.