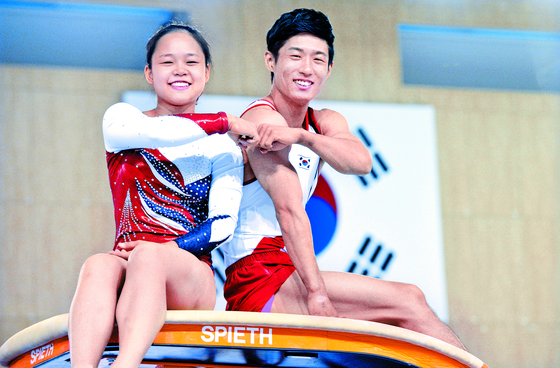 Yeo Seo-jeong, left, and Yang Hak-seon pose for a photo at the Jincheon National Training Center in North Chungcheong on July 10, 2019. [Joongang Ilbo]


Seven Korean gymnasts will attempt to vault their way onto the medal table at the 2020 Tokyo Olympics.

Artistic gymnastics is the oldest of the three, having been around since the first modern Athens Games in 1896, when it was a men-only event. Women’s events were included at the Amsterdam Games in 1928. There are now six disciplines for male athletes — floor exercise, pommel horse, rings, vault, parallel bars and horizontal bar — and four for women — floor exercise, uneven bars, balance beam and vault.

In rhythmic gymnastics, female athletes use hoops, balls, pairs of clubs and ribbons to perform expressive movements to music.

Trampoline gymnastics is the most recent addition, as it made its Olympic debut at the 2000 Sydney Games. Trampoline gymnasts perform twists, bounces and somersaults on the trampoline to combine daring moves, form and flight time.

All seven Korean gymnasts will be competing in artistic gymnastics.

Shin Jea-hwan, Kim Han-sol, Ryu Sung-hyun, Yang Hak-seon and Lee Jun-ho will be competing in the men’s events and Lee Yun-seo and Yeo Seo-jeong in the women’s events.

Yeo is a rising star, and also a familiar name in Korean gymnastics because she is the daughter of Yeo Hong-chul who won silver in the men’s vault at the 1996 Summer Olympics in Atlanta. Her mother Kim Yoon-ji is also a gymnast, winning the team bronze medal in artistic gymnastics at the 1994 Asian Games.

Following in the footsteps of her gymnast parents, the 19-year-old has been making a name for herself. 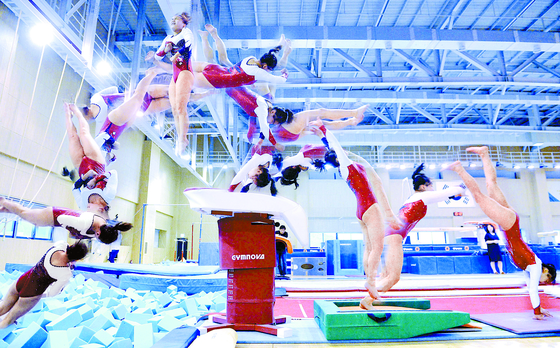 
During the Korea Cup in Jeju in June 2019, she successfully performed a new skill and had it named after her, the “Yeo Seo-jeong,” which is a mix of her father Yeo Hong-chul’s skills “Yeo1” and “Yeo2.” With a difficulty score of 6.2, the new vault includes a forward handspring and a salto forward with a 720-degree twist at the end.

After successfully performing her vault at the Korea Cup, it was recognized by the International Gymnastics Federation (FIG) and was listed on the FIG Code of Points.

Tokyo is a special event for the Yeo family as her father will be commentating at his daughter’s first Olympics. 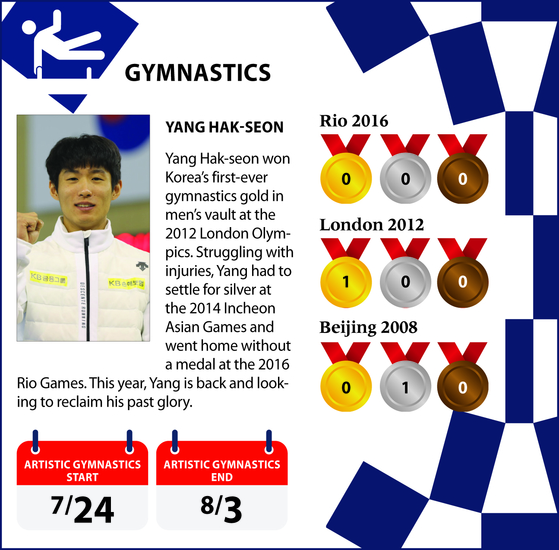 But Yeo is not the only one who has a skill named after, as Yang, too, is the inventor of the "Yang Hak-seon1."

Yang is the face of Korean gymnastics, having won Korea’s first-ever gold in the sport in men’s vault at the 2012 London Olympics. Despite his achievement, Yang quickly left the spotlight after suffering numerous injuries. 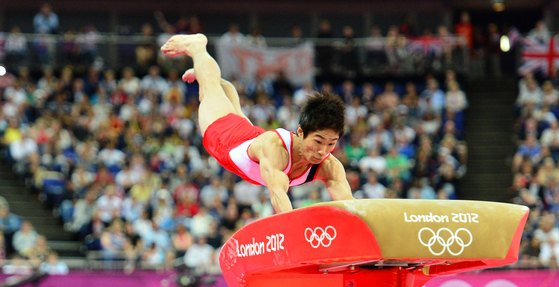 Yang Hak-seon competes at the men's vault final at the 2012 London Olympics at the North Greenwich Arena in London where he won Korea's first gold medal in gymnastics. [JOINT PRESS CORPS]


Yang settled for silver at the 2014 Incheon Asian Games, during which he was dealing with a right thigh injury. He hoped to repeat his success at the 2016 Rio Olympics but wasn’t able to do so after undergoing surgery on his right Achilles’ tendon.

The 28-year-old is looking for a return to his former glory at the Ariake Gymnastics Center in Tokyo.

Artistic gymnastics events start on July 24 and end on Aug 3.