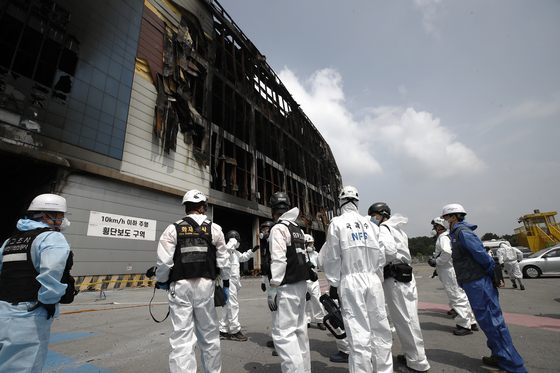 Officials from the National Forensic Service, Gyeonggi Province Fire Services and police inspect Coupang’s Deokpyeong Logistics Center in Icheon, Gyeonggi, to find out the cause of a fire on June 29. [YONHAP]


The Gyeonggi Nambu Provincial Police Agency said Monday it has booked three employees from a contractor that managed the electricity and fire protection systems at Coupang’s Deokpyeong Logistics Center in Icheon, Gyeonggi, where a deadly fire broke out last month.

According to the police, the three people — a team leader and two employees — were in the logistics center on June 17 when the fire started at around 5:20 a.m. on the second basement level of the facility.

The three allegedly turned off the fire alarm six times after it first started at 5:27 a.m., which caused a delay in the sprinklers starting. The employees thought the fire alarm was “malfunctioning,” the police said.

The sprinkler system then kicked off at 5:40 a.m., about 20 minutes after the fire started.

“When the fire alarm starts, firefighting equipment detects heat and smoke and that is the time when water sprinklers work,” the police said. “But if someone presses the reset button, the process goes back to the beginning."

“It seems like the delay to the sprinkler system caused the fire to grow,” police added.

The deadly fire continued for six days and was extinguished on June 22. A 52-year-old firefighter named Kim Dong-shik died while responding to the conflagration.

The three employees are currently under investigation for allegedly violating the Act on Fire Prevention and Installation, Maintenance and Safety Control of Firefighting Systems. The police are also investigating the contractor under Korea's joint penal provision that allows for the punishment of both the employee and employer for laws broken while working.

Coupang is not being accused of anything.

“The investigation showed that Coupang was not implicitly [connected to the outbreak of the fire] because there was a separate company that was in charge of the electric facilities,” the police said.