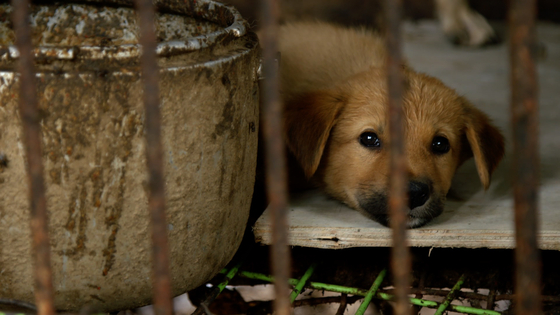 A scene from the film. The dog “Nureongi,” which is the most common type of dog breed in Korea, trapped in a cage of a dog farm. [JUST BRIGHT PRODUCTIONS]

Boknal refer to the three hottest days of the summer between July and August which change every year based on the lunar calendar.

The three days are specifically referred to as chobok, jungbok and malbok, and this Wednesday marks jungbok, or the beginning of the second phase of the midsummer heat.

When American television producer Kevin Bright, who's best known for the series “Friends” (1994-2004), heard of Korea’s dog meat culture, he could hardly digest the information. 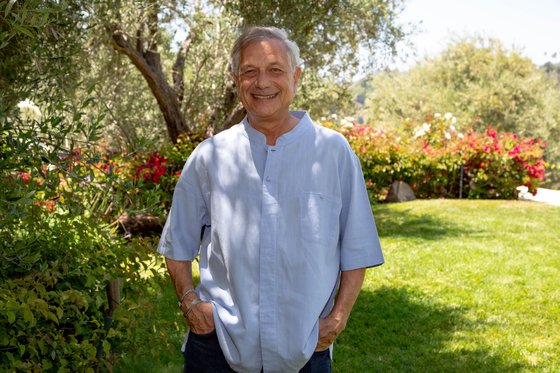 
“I first heard about dog meat in Korea five years ago and the first thought that came to my mind is — this has to be wrong,” Bright told the Korea JoongAng Daily via email. “Korea has one of the top educational systems and economy in the world. I thought eating dog meat must be some old wives’ tale and can’t possibly be true.”

Bright initially visited Korea with the purpose of finding out more about the local dog meat trade. He followed his wife Claudia and her friend Tami Cho Zussman, a Korean-American who founded an organization called the DoVE Project to rescue dogs from the Korean dog meat trade and put them up for adoption for households in the United States.

It was during this visit that Bright decided to make a film about dog meat in Korea. Titled “Nureongi,” which translates to the name of a very common local dog breed, the one-hour documentary was released for free on YouTube last month. The director initially planned to visit Korea last week to discuss with local audiences their thoughts about the film, but his trip was postponed as the daily cases of coronavirus peaked during that time.

The film starts off by following Zussman’s trip to Korea to rescue the dogs, and includes street interviews with the public about their thoughts of the culture and with experts who either advocate and oppose eating dog. The interviews include those with a folklorist, members of the Dog Meat Association (DMA), professors, medical journalists, specialists on animal behavior and lawmakers who are attempting to legalize the prohibition of the consumption of dog meat and the running of dog farms. The film takes a close look at the facilities where dogs for consumption are raise and asks the audience what the difference is between dogs that are kept as pets and dogs that are raised for meat. 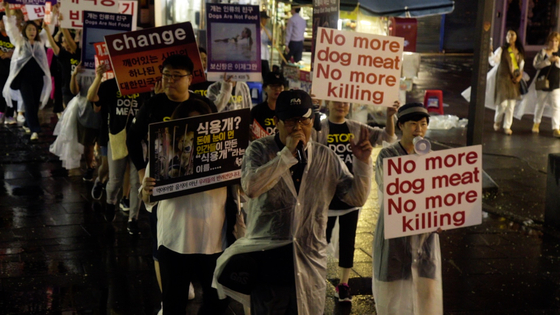 
The film’s response has been generally positive. On YouTube, calls for the enforcement of punishment for animal abuse, criticisms of the method of slaughtering dogs, and hopes for the end of the dog meat industry and its culture dominate the comment section. One of the most-liked comments reads; “It’s so horrifying I almost don’t want to see it, but we have to come to terms and confront our reality. Let’s all ‘act’ on it instead of merely feeling pity [for the dogs].”

This is the exact reaction that Bright hoped for. Although he directed the film, his aim was for the film to not be based on the viewpoint of an outsider, so he worked with a Korean producer, staff and editor to help guide him through the interviews. Along with its title, the film is entirely in Korean.

“The specific target audience for this film has always been South Korea,” Bright said. “I wanted ‘Nureongi' to appeal to a diverse Korean audience, starting with teenagers and going as old as possible because this issue effects everyone in Korea.

“[Regarding the title], I wanted to give the film a title that sounded familiar to the Korean ear,” he said. “The title should bring the image of dogs to mind when Koreans hear it [...] I know that Nureongi can also be construed as a meat dog.”

While trying to get a sense of how Korean society perceives the consumption of dog meat, Bright learned that it is a dying tradition.

The film also depicts the process of making bosintang, beginning with how the dogs are raised on farms to their slaughter, and how the meat is cooked to make the soup. The conventional form of slaughter is by electrocution, which was described as a “quick and pain-free” death by the Dog Meat Association.

The director learned that most people were oblivious to the process of making bosintang and purposefully included such explicit scenes to raise public awareness.

“It was actually the reason I made the film in the first place,” he said. “I knew for a fact that over two-thirds of Korean society does not eat dog meat and as a result they know very little about it.” 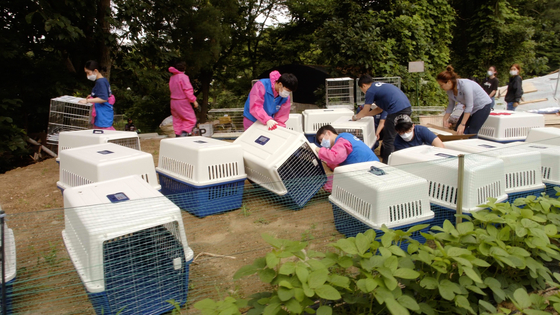 
Although the tradition of eating dog meat in Korea is dying out, there are still over 10,000 dog farms which raise dogs for consumption, and over 1.5 million dogs are consumed annually.

Bright revealed that it was difficult to find investors, which is why he funded the film himself.

"America and most European countries only consider dogs to be pets and think the idea of a film focusing on dogs as livestock would be offensive to the majority of the world audience,” he said. “In spite of that, I felt that this was a film that needed to be made.”

Bright understands that there are people whose livelihoods depend on the industry. Dog meat consumption remains on a precipice because technically there are no laws legalizing it, but no laws prohibiting it either.

A particularly memorable scene from the film shows private animal rights organization CARE making a deal with a dog meat farm owner in Namyangju, Gyeonggi, for him to sell his dying business with the promise that he will never become involved in the industry again.

“I never meant to hurt these dogs,” the owner says in an interview. “I feel bad and I am sorry.”

“The closings that have been made so far are just the tip of the iceberg,” Bright said. “Individual closings cannot solve the problem. The government must provide incentive programs to the dog farmers to change their business.”

Bright also shared the responses from the Dog Meat Association, who saw the film during a private screening ahead of its release.

“The purpose of the screening was to allow the DMA an opportunity to share their views with me on the final cut of the film," Bright said. “I was ready to listen to them and make some compromises, but the DMA were having none of it. They said my movie was a lie and that it must be destroyed and never seen by anyone in Korea. The DMA expected me to make a pro-dog meat film, when I told them the entire time this was an unbiased movie that would reflect both sides. That screening was the end of my communication with the DMA.”

The director feels that the answers to the plethora of issues will come through discussions and negotiations. At the end of the day, what Bright remains concerned about are the dogs still left on the farms.