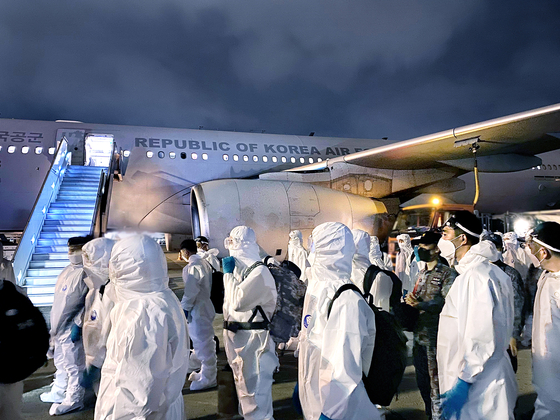 Troops and medical personnel who will assist the airlift of the Munmu the Great's crew back to Korea wait next to a KC-330 Cygnus multipurpose tanker airplane after their arrival in the Gulf of Aden early Monday morning, local time. Two airplanes were dispatched by the Defense Ministry and the Joint Chiefs of Staff late Sunday afternoon from Korea and are expected to return with the 34th contingent of the Cheonghae unit to Korea by Tuesday at the earliest. [NEWS1]


The worst fears of health experts and military officials came true over the weekend as the Covid-19 outbreak aboard the Munmu the Great destroyer spread to a total 247 out of 300 crewmembers aboard, according to the Joint Chiefs of Staff (JCS) on Monday.

The number of crewmembers who tested positive for Covid-19 on the ship, which is stationed in the Gulf of Aden in eastern Africa, rose by 179 as of 8 a.m. Monday (Korea time), bringing total confirmed cases to 247.

According to the Joint Chiefs of Staff, the number of Navy servicemen who were admitted to a local hospital for medical treatment due to pneumonia symptoms had risen to 16, up from 15 on Sunday. The symptoms of two out of three crewmembers who required close medical attention reportedly improved.

The crewmembers infected with Covid-19 include the captain and nearly all officers aboard the vessel, leaving the ship without effective leadership, according to a military source.

The cumulative figure of infected crewmembers on the destroyer represents 82 percent of the Navy's Cheonghae unit, which conducts peacekeeping and anti-piracy missions.

One military official who spoke on the condition of anonymity said the mass infection of the crew pointed to a failure of isolation measures aboard the ship. "Although 80 crewmembers were put into isolation, the ship's systems are all interconnected, rendering such quarantine measures ineffective."

The Cheonghae unit maintains a constant presence in the region with a rotation of ships and contingents from Korea. The Munmu the Great destroyer left Korea with the 34th contingent in February, long before the country's mass vaccination program for military personnel began.

The outbreak on the Munmu, the first signs of which began with a naval officer’s admission to a local hospital with pneumonia symptoms on Thursday, prompted the Defense Ministry and Joint Chiefs of Staff to organize an airlift of the ship’s crew back to Korea and an unprecedented canceling of the 34th contingent’s mission.

The 34th contingent will be the first team to abort its mission since the Cheonghae unit was established in 2009. The troops are rotated every six months.

As a result of the Munmu the Great's early return to Korea, the 35th contingent’s Chungmugong Yi Sun-sin destroyer will relieve the Munmu and its crew of their duties, according to various military sources.

The contingent was originally scheduled to hand over its peacekeeping and anti-piracy mission to the 35th contingent aboard the Chungmugong next month.

All 300 members of the 34th contingent of the Cheonghae unit aboard the Munmu the Great will return home on two KC-330 Cygnus multipurpose tanker airplanes dispatched by the Defense Ministry and the JCS.

The planes departed from Kimhae Airport near Busan late Sunday afternoon. The first plane arrived in an unidentified eastern African country on the Gulf of Aden on Monday at 1:40 p.m. (Korea time), with the second landing later.

The planes carried 148 Navy servicemen, 39 Air Force members and 13 medical personnel, who will assist with the evacuation of the Munmu’s crew. All have been vaccinated and tested negative for Covid-19, according to military officials.

The outbreak on the Munmu the Great – the largest to ever occur in the armed forces – prompted scrutiny over why the military’s vaccination program did not extend to troops stationed overseas.

In a Facebook post Monday, opposition People Power Party lawmaker Ha Tae-keung said the outbreak aboard the Munmu represented “an international embarrassment” and a “slap in the back of the head,” especially after a cluster in April, when 32 crewmembers aboard the Goh Jun-bong amphibious landing ship tested positive for Covid-19.

“I argued strongly for vaccines to be distributed to servicemen who work in confined quarters, and the vaccination for troops fortunately picked up speed after that.” Ha said. “But I assumed that troops in the Cheonghae unit, who work in enclosed spaces for long periods of time, had been vaccinated.”

In response to criticism over why vaccines were not sent to the Navy’s 34th contingent, Jeong Eun-kyeong, commissioner of the Korea Disease Control and Prevention Agency (KDCA), said at a press briefing Monday, “The vaccines would have had to be sent by air, and it was judged that it would have been difficult to store the vaccines properly during that process.”

However, that explanation - which is the same as the one given by the Defense Ministry - faced criticism from military insiders who spoke to the JoongAng Ilbo on the condition of anonymity on Monday. "The only hope to prevent this kind of situation was to vaccinate the Munmu the Great's crew ahead of time," said one official. "The current response is akin to losing a cow and fixing the cattle pen."