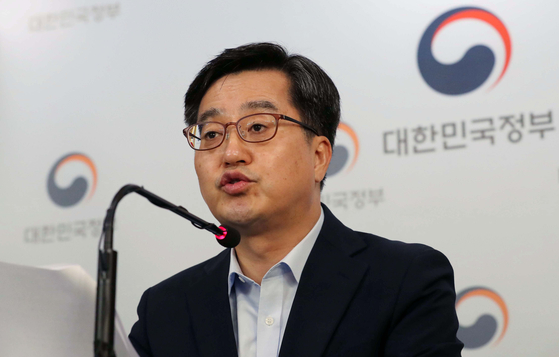 Kim was minister of economy and finance and deputy prime minister for the economy from May 2017 to December 2018. He joins former Prosecutor General Yoon Seok-youl and former head of the Board of Audit and Inspection (BAI) Choe Jae-hyeong as challengers to the ruling party's candidate, who has not been chosen yet.

“As a person who received benefits from the country by working as a public servant for 34 years, it is my duty to devote myself if there is something I must do for the country,” Kim said in an interview with CBS radio on Monday.

When Moon picked Kim as finance minister in May 2017, he stressed that he had no personal connection with Kim but had faith in his capabilities. Moon described him as a boy wonder who rose from a shantytown to become a top government official respected in political circles, academia and industry for his crisis management ability. “I believe he is a person who can sympathize with the hardships of the ordinary people,” Moon said.

In the interview on Monday, Kim admitted leaving the Moon government after clashes with the president over rapid minimum wage hikes. Kim said he told Moon that increases were necessary, but the should be done steadily with a plan. “But my opinion was not accepted,” he said. “I spoke frankly about the issue for the sake of the country and the people.”

Kim has kept a distance from the two major parties – the ruling Democratic Party (DP) and the main opposition People Power Party (PPP) – and political observers have said he will run as a candidate from the so-called “third zone.”

“I do not agree with the term, third zone,” Kim said in the Monday interview, but made clear that he wanted to challenge candidates from both the main parties.

He said politicians from those parties wasted their energy on ideological and factional fights rather than focusing on the country’s future. “Unless we replace them, we won’t be able to resolve the structural problems of our society and economy that have accumulated over the past 20 years.”

Kim urged the public to support his bid to keep both the DP and the PPP from winning the next presidency.

Meanwhile, the latest poll on the president race showed that former Prime Minister Lee Nak-yeon of the DP and former BAI chief Choe of the PPP are quickly catching up with two frontrunners, Yoon and Gyeonggi Governor Lee Nak-yon of the DP.

According to a poll by the Korea Society Opinion Institute conducted on Friday and Saturday and released Monday, Yoon took the top slot with 30.3 percent, up 0.4 percentage point from the previous week.

Choe followed in fourth place with 5.6 percent, up 3.1 percentage points, less than a month since he stepped down as BAI head and less than a week since he joined the PPP last Thursday.

More details about the poll are available at the Internet site of the National Election Survey Deliberation Commission.