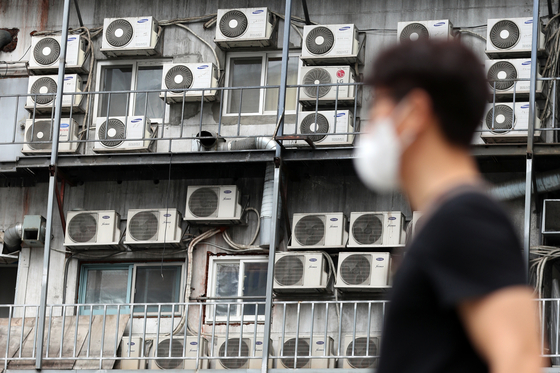 Air conditioners are seen on a building in Seoul Monday as the Ministry of Trade, Industry and Energy predicted that power reserves will drop to 4.2 percent this week, the lowest level since the summer of 2013. [NEWS1]


The government on Monday asked local governments and public offices around the country to shut off their air conditioners for a 30-minute period each day to prevent blackouts.

The Ministry of Interior and Safety asked the central and local governments and other public institutions to limit operation of air conditioners during the day as an electricity shortage is threatened. The ministry sent letters to public offices at the request of the Ministry of Trade, Industry and Energy.

The ministry asked public offices to turn off their air conditioners for 30 minutes at a set time between 2 p.m. and 5:30 p.m. starting Monday.

The government complex buildings in central Seoul will increase their thermostats from 26 degree Celsius (78.8 Fahrenheit) to 28 degrees Celsius from Monday through Aug. 13.

A heat wave has hit Korea and the Energy Ministry has said electricity demand could go up to 94 gigawatts (GW) during the fourth week of July, possibly bringing down the power reserve ratio to 4.2 percent, or reserve capacity to 4 GW.

The reserve ratio, the difference between available capacity and peak demand, plummeted to 10.1 percent on Tuesday, bringing the reserve capacity to 8.8 GW.

When reserve capacity falls below 5.5 GW, an emergency warning is declared to prevent possible blackouts. The last warning was issued in 2013. 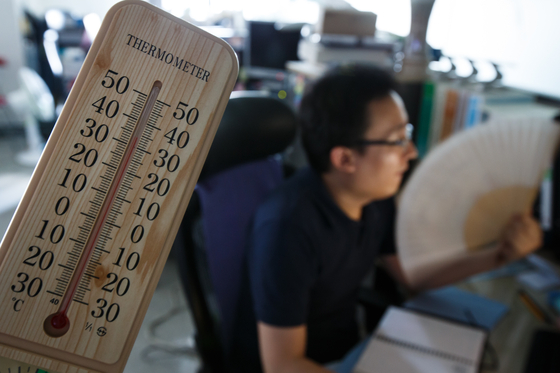 In this file photo, a government worker uses a fan as the air conditioning system of the government complex in central Seoul is shut down to prevent a blackout on Aug. 13, 2013. The room temperature was 34 degree Celsius without air conditioning. [NEWS1]

President Moon Jae-in on Monday ordered his aides to pay more attention to manage the reserve capacity. He also ordered the government to protect the elderly and poor from the heat.