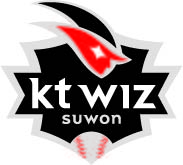 The KT Wiz announced on Monday that one of their coaches has tested positive for Covid-19.

According to the club, the coach started showing symptoms on Friday and skipped training on Saturday and Sunday. He was tested on Sunday and received the positive result on Monday morning.

All Wiz players and staff have also been tested and are awaiting results.

The league is currently in the midst of a four-week break for the 2020 Tokyo Olympics. The break was originally supposed to be three weeks, but was extended after a number of players tested positive for Covid-19, forcing so many games to be canceled that the KBO ultimately decided to postpone a week of games.

The fallout from that cluster left four NC Dinos players suspended for the rest of the season after breaching social distancing rules and triggering the outbreak.

The KT Wiz are currently in first place on the KBO table.

With no baseball scheduled until Aug. 10, any Wiz players classified as close contacts will be able to isolate without interrupting the season.

The Olympic baseball team is due to play an exhibition game against a squad made up of the KBO’s best young players on July 23. Whether any Wiz players picked for that young squad will have to sit out the game remains to be seen.

The Olympic team players are already vaccinated and training together.