Commuting by car is up, but so is the price of gas

Commuting by car is up, but so is the price of gas 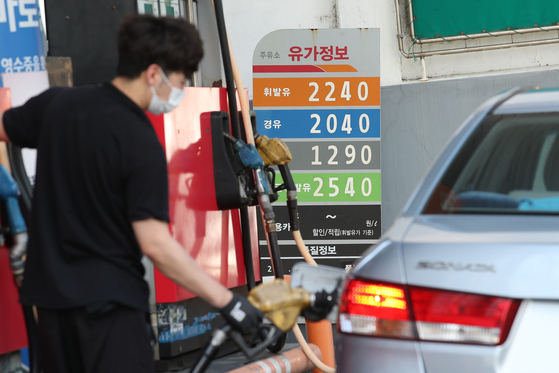 A car owner pumps gas into his car. [NEWS1]


As the number of Covid-19 cases spike, people are shifting from public transportation to private cars, but with high gas prices, the move is costing them plenty.

A 45 year old living in Mapo District, western Seoul, started driving his car to his office in Gunpo, Gyeonggi to avoid crowded subways with Covid-19 cases surging and the government tightening social distancing measures. Being a father of two young children — one in kindergarten and another in elementary school — he said he wants to take all possible precautions.

Sticking to cars, he faced another problem — gasoline prices. A lot of fuel is needed to travel back and forth between Seoul and Gyeonggi every day, and he is spending a lot of gas.

“I also used to ride my car to work when Covid-19 cases were high last year, but gasoline prices are much higher these days,” he said. “Pumping 50,000 won [$44] of gasoline doesn’t even last a week.”

The average gasoline price in Seoul on Tuesday was 1720.57 won.

Diesel prices were no exception. The average nationwide diesel price between July 11 and 15 was 1,424 won, up 0.9 percent on week and two-year-and-eight-month high.

High prices hit people hard, but more so as they favor cars over trains and buses.

Based on data provided by Seoul city government, an average of 3,052 cars passed through Namsan Tunnel No. 1 — the tunnel connecting Hannam-dong with central Seoul — between 5 p.m. and 7 p.m. from July 5 to 16. That’s up 8.4 percent from February, when Covid-19 cases fell to some 300 per day.

According to the Samsung Traffic Safety Research Institute, people have been avoiding subways and buses. In December 2019, before the outbreak of the pandemic, 65 percent of office workers commuted to work by public transportation, while 35 percent took cars. In May last year, the number of people using cars rose to 41 percent, up 6 percentage points. People using public transport dropped to 59 percent, down 6 percentage points.

The Organization of the Petroleum Exporting Countries (OPEC) and OPEC Plus announced on July 18 that they will increase oil production, which globally raised hopes for eased gasoline prices.

“It takes about three weeks for the change in global oil prices to be reflected in local consumer prices,” said an employee working at the Ministry of Economy and Finance.

Hyundai to produce new Tucson in U.S. plant next year