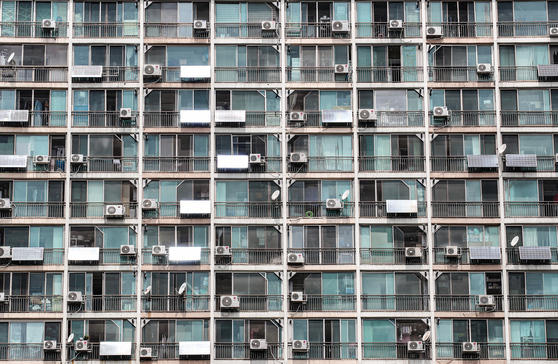 Air conditioners installed on an apartment in Gwanak District, Seoul, on Tuesday. As temperatures continue to rise, air conditioner user has led to a spike in energy consumption. [YONHAP]

The government is trying to stabilize the nation’s power supply by getting nuclear reactors back into operation.

The Ministry of Trade, Industry and Energy said Tuesday that the Shin Kori unit 4 reactor, which was closed for maintenance, will be back in operation July 21, a week earlier than planned.

Shin Wolsong unit 1 reactor, which had its start date moved up a month to July 18, will reach its full capacity of 1,000 megawatts by July 21.

The Wolsong unit 3 reactor, which was shut for maintenance, will go back into operation on schedule on July 23.

The three reactors will be contributing 2,150 additional megawatt of energy this week.

The government’s overarching goal is to keep the power reserve ratio — the difference between total supply and current demand — above 10 percent in the summer heat.

“While our energy supply this summer is at the same level as previous years, there is a possibility of a demand surge due to the ongoing heat,” said Trade, Industry and Energy Minister Moon Sung-wook. “The government and power institutions will focus all of our abilities in managing a stable power supply.”

Energy consumption has risen sharply due to both the rising temperatures and more people being forced to stay home -- with  their air conditioners on -- due to heightened Covid-19 social distancing restrictions.

In addition to supply from nuclear reactors, the government is promoting a power conservation campaign led by public institutions.
Government offices will keep their indoor temperature between 26 and 28 degrees Celsius (79 to 82 Fahrenheit) while taking turns turning off their air conditioners during the peak hours between 2 and 5 p.m.

The ministry projected earlier this month that the power reserve ratio could fall as low as 4.2 percent this summer.
If so, that would be its lowest level in eight years.

This week is expected to be the worst so far in terms of demand for electricity.

The Korea Meteorological Administration projects this summer could be as hot as 2018, when temperatures rose to their highest levels in 111 years, and warns that a “heat dome” could form above the Korean Peninsula.

The energy crunch has inevitably revived criticism of the Moon Jae-in administration’s energy policies, especially its moves to phase out nuclear energy because of its safety risks.

Nuclear reactor projects have been delayed or scrapped.

The Shin Hanul unit 1 reactor was finally given approval to operate on July 1. The reactor, which was completed in April 2020, had to wait 15 months before its operation was green lit.

Yet, the reactor will not be fully operating until early next year.

Construction of Shin Hanul units 3 and 4 were scrapped entirely despite 700 billion won invested in them.