Virus panic hits Kospi for third day in a row

Virus panic hits Kospi for third day in a row 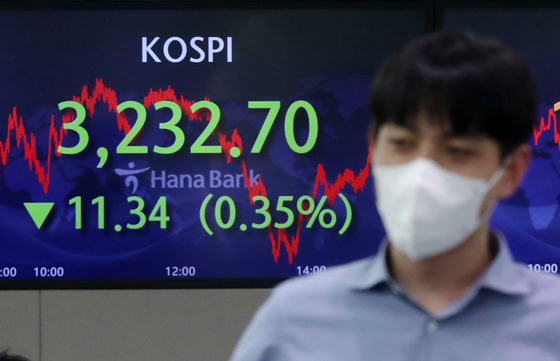 
Stocks extended their losing streak to a third consecutive session Tuesday following a U.S. stock plunge over concerns that new coronavirus variants may deter economic recovery. The Korean won fell against the dollar.

Virus worries continued to pull down the Kospi after the key stock index's 1 percent retreat the previous session.

Overnight, the big-three U.S. stock indexes tumbled, with the Dow Jones Industrial Average declining 2.09 percent. The tech-heavy Nasdaq Composite and the S&P 500 were down 1.06 percent and 1.59 percent, respectively.

"Investors seem to be worried that the resurgence of the delta variant could turn down the corporate earnings forecast for the second half this year," Eugene Investment & Securities analyst Huh Jae-hwan said.

The local currency closed at 1,150.4 won to the dollar, up 2.6 won from the previous session's close.