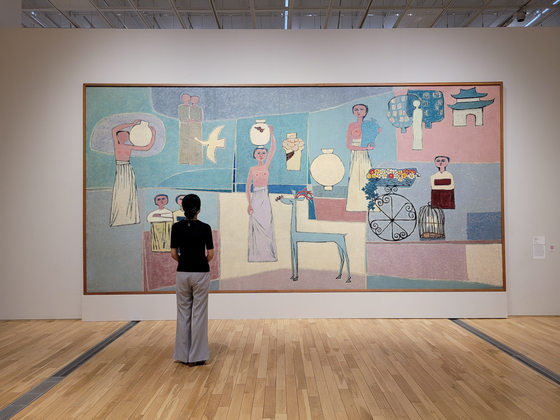 A visitor looks at Kim Whanki’s “Women and Jars”(1950s) in a preview of the “MMCA Lee Kun-hee Collection: Masterpieces of Korean Art” exhibition at MMCA Seoul. [MOON SO-YOUNG] 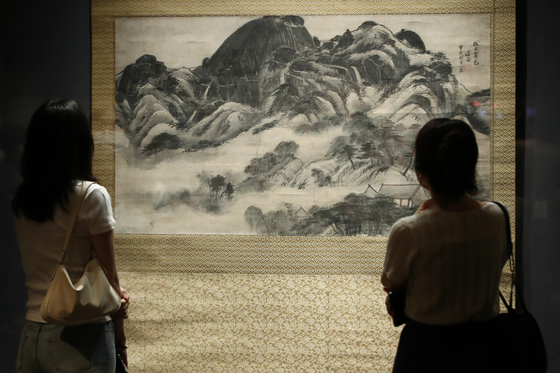 “Inwangjesaekdo (Clearing after Rain on Mount Inwang)”″ by Jeong Seon (1676-1759), which is Korea’s National Treasure No. 216, is now on view at the National Museum of Korea in central Seoul. It is part of the two-month exhibition “A Great Cultural Legacy: Masterpieces from the Bequest of the Late Samsung Chairman Lee Kun-hee.”″Featuring 45 artworks and artifacts from the Lee Kun-hee collection donated to the museum, the exhibition kicks off today and runs through Sept. 26. [YONHAP]


“Artist Kim Whanki couldn’t have created such a large-scale painting in the [difficult] economic conditions of the 1950s if it had not been commissioned by the chairman of Samho Group [then Korea’s biggest textile company]. Now the painting is before us as part of late Samsung Group chairman Lee Kun-hee’s collection donated to our museum. It shows how important the role of patrons is in the art world.”

This is what Park Mi-hwa, curator of the exhibition “MMCA Lee Kun-hee Collection: Masterpieces of Korean Art,” said in a press preview of the show on Tuesday, while explaining “Women and Jars”(1950s), a 5.7-meter-wide (18.7 feet) painting by Kim Whanki (1913-1974), one of the most important figures of modern Korean art.

The exhibition, which features 58 paintings and sculptures by 34 Korean modern art masters including Kim, opens to the public at the National Museum of Modern and Contemporary Art (MMCA) in central Seoul on Wednesday.

“A large part of the 1,488 artworks donated to our museum from Lee’s collection is modern art [from periods earlier than contemporary art], from which our museum has suffered a shortage of,” Park said. “Accordingly, for the first of our special exhibitions featuring the donated Lee collection, we selected modern art pieces by Korea's most popular artists.”

The exhibition starts with two spectacular large-scale paintings “Peach Blossom Spring” (1922) by Lee Sang-beom and “Paradise”(ca. 1936) by Baik Nam-soon with which “viewers can compare the depiction of arcadia in the styles of the East and the West in the era when Korean art began to be heavily influenced by Western modern art,” according to the museum. The exhibition also includes famous paintings by Yoo Young-kuk, Park Soo-keun and Lee Jung-seob. 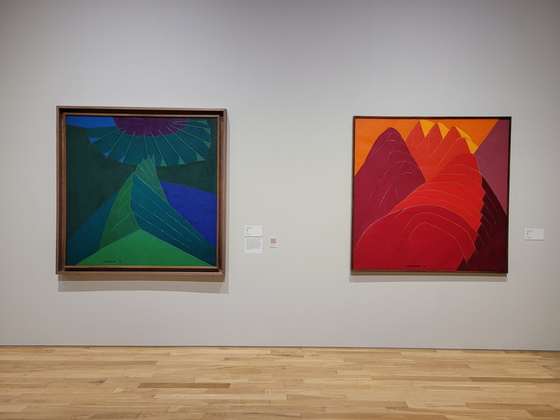 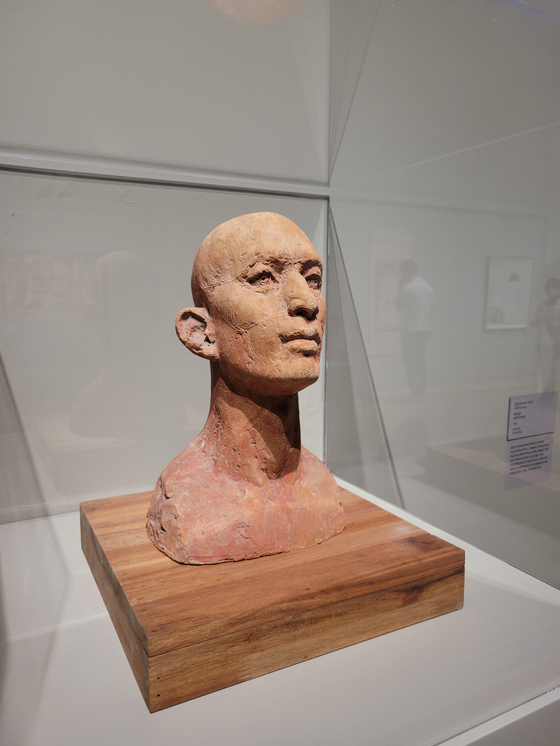 
The National Museum of Korea in Yongsan, central Seoul, also opens a special exhibition of the Lee Kun-hee collection donated to the museum on Wednesday. Titled “A Great Cultural Legacy: Masterpieces from the Bequest of the Late Samsung Chairman Lee Kun-hee,” the exhibition features 45 Korean artifacts and old artworks, 28 of which are designated as National Treasures and Treasures. Among the Lee collection, 9,797 artworks and artifacts went to the National Museum of Korea.

“We found that late Chairman Lee’s extensive art collection is in accordance with his business philosophy that puts emphasis on innovation in technology and design,” said Kang Kyung-nam, curator of the exhibition. “We’ve selected the 45 items that show it clearly.”

Among such works is the ink-and-wash painting “Inwangjesaekdo (Clearing after Rain on Mount Inwang)” by Jeong Seon (1676-1759), which is National Treasure No. 216. Unlike most landscape paintings of the Joseon period (1392-1910), the painting innovatively depicts the real Mount Inwang near the artist’s home in central Seoul instead of a famous scenic spot such as Mount Kumgang or an ideal imaginary mountain.

Among the exhibits are a burnished red earthenware jar with a beautiful sheen from the Bronze Age; a boat-shaped stoneware vessel from the Three Kingdoms period (18 B.C. – A.D. 660) and two Buddhist paintings from the Goryeo period (918-1392) created with baechae, or the unique technique of coloring from the reverse side of a piece of silk. All of them show not just beauty but also advanced technologies of their times. There are also two publications from the 15th century, which are Korean translations of the Buddhist texts for test of hangul, or Korean alphabet, invented in 1443. Hangul is regarded as the most important invention in Korean history. 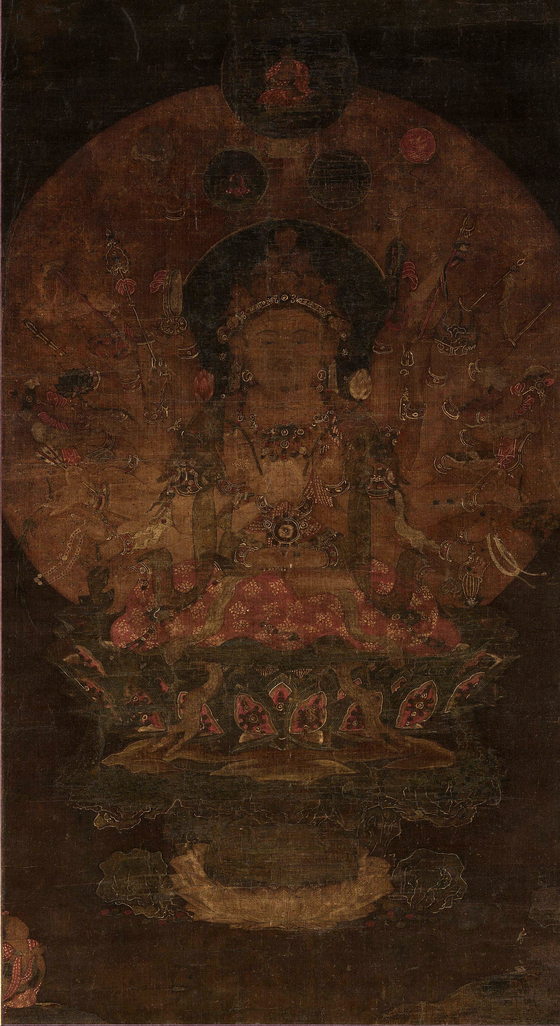 ″Thousand-Armed Avalokiteshvara″(14th century) from Goryeo Dynasty is part of the special exhibition of the donated Lee Kun-hee collection. The painting is designated as Treasure No. 2015. [NATIONAL MUSEUM OF KOREA] 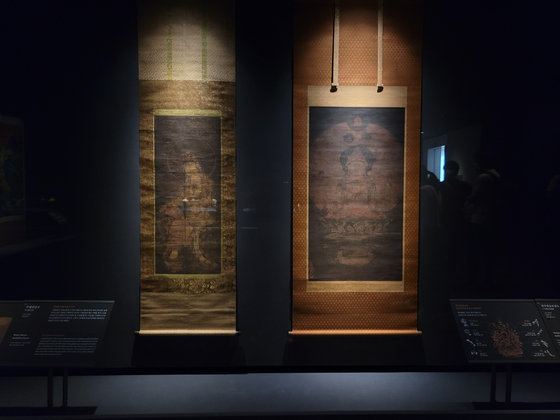 
The museum quoted Lee as saying, “I believe that collecting and preserving cultural heritage is vital for the future of human culture, and it is a universal obligation of us all, mandated by our times.” The museum added in a press release, “In consequence, his collection came to comprise a wide array of art dating from the prehistoric through modern periods.” 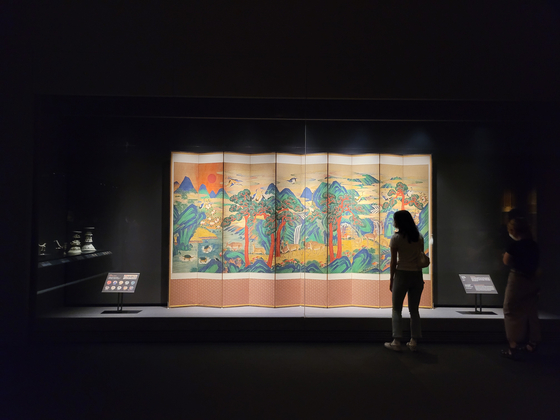 Visitors to the exhibition look at “Ten-panel Folding Screen with the Ten Longevity Symbols”(19th century) from the Joseon period.[MOON SO-YOUNG]


Those who want to visit either of the two exhibitions need to be patient. Due to the resurgence of the Covid-19 pandemic and tightened social distancing regulations, only visitors who make a reservation through the museums’ web sites in advance will be allowed. As for the National Museum of Korea (www.museum.go.kr/site/eng/reserve/specialhall/intro), up to 20 people are allowed for every 30-minute time slot. However, all the time slots have been reserved until Aug. 19. As for the MMCA (www.kguide.kr/mmca001/0102_en/), 30 people will be allowed every one-hour time slot. Currently, there are no available time slots until after Aug. 3.

Meanwhile, Culture Minister Hwang Hee announced earlier this month that the government will set up a new national museum to house the donated Lee collection at either a Songhyeon-dong site near the MMCA or a Yongsan-dong site next to the National Museum of Korea.