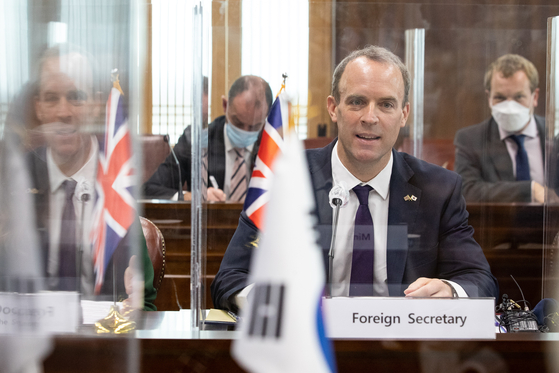 British Foreign Secretary Dominic Raab in a meeting at the headquarters of Korea's Foreign Ministry in central Seoul on Sept. 29, 2020. [NEWS1]

A British parliamentary group asked Foreign Secretary Dominic Raab to get involved in hundreds of North Koreans trying to defect from China to South Korea. It asked Raab to meet with the South Korean and Chinese ambassadors in London.


“We are writing to bring to your attention the forcible repatriation of 50 North Korean escapees by Chinese authorities on Wednesday 14th July. These North Koreans will without doubt end up in prison and labour camps where they will very likely die, either by execution or as a result of the dire conditions and mistreatment,” reads a letter written by the All Party Parliamentary Group on North Korea on Monday.

“This must not be the fate of North Korean escapees who simply ask to be able to continue their journey via China to South Korea and other democratic nations.”

Around 50 North Korean defectors were deported from China to North Korea on July 14, according to the U.S.-government funded Radio Free Asia. They were reported to include North Korean soldiers, including an air force officer.

Signed by Lord Alton of Liverpool, an independent and former member of the Liberal Party, and Timothy Cho, a North Korean defector-turned-lawmaker in Britain and a member of the Conservative Party, the letter asked Raab to speak to the Chinese and South Korean ambassadors in London.

"Meanwhile, there are several hundred more North Korean escapees detained in Shenyang, Tumen and other detention centres," said the letter. "We urge the international community [...] to call for these escapees to be deported to South Korea, which will automatically receive them under its ‘one Korea’ policy.

Noting that China’s repatriation of North Korean defectors to North Korea is a violation of agreements outlined in the 1951 Refugee Geneva Convention, the 1967 Refugee Protocol, and the 1995 UN High Commissioners for Refugees, to which China is a signatory nation, the parliamentary group called for international attention to the matter and emphasized that Britain “should not remain silent."

In recent press statements, the U.S. State Department has emphasized its resolve to address the human rights situation in the North.

“The United States is committed to placing human rights at the center of our foreign policy, including in the DPRK,” a press officer in the State Department told the Voice of America on Tuesday, using an acronym for the full name of North Korea, the Democratic People’s Republic of Korea. “We will continue to prioritize human rights in our overall approach towards the DPRK. Even where we disagree with a regime like the DPRK, we must work to the best of our ability to alleviate the suffering of its people.”

According to a Politico report last week, U.S. Secretary of State Antony Blinken has asked American diplomats to prioritize human rights and democracy in their programs abroad.

North Koreans trying to defect to the South often seek asylum at a Korean embassy in a third country. If they are caught during their escape, they can be sent to political prison camps or executed.