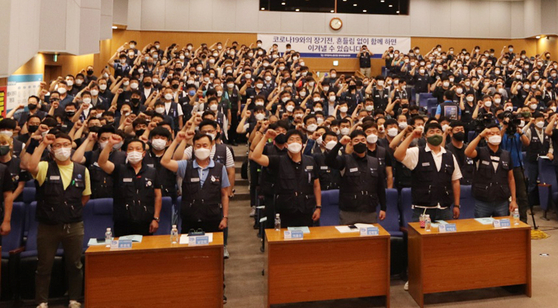 Hyundai Motor’s management and unionized workers reached a tentative agreement on this year's wage package on Tuesday, avoiding a walkout for the third consecutive year.

The two sides agreed on a 75,000-won ($65) raise in base monthly pay and two months' pay as incentives. Workers will also receive a one-off bonus of 3.5 million won and five Hyundai Motor shares.

An extension of the retirement age, one of the requests unionized workers pushed for, wasn't included in the tentative agreement. The management also refused to reinstate fired workers.

The two sides also made a special agreement Tuesday on having domestic factories and R&D centers continue to play a central role amid the industry's transition into electric and self-driving cars.

The tentative agreement will be put to a vote on July 27.

Tuesday’s deal marks three years in a row that the two sides have come to an agreement without the union staging a strike.


In 2019, the union didn't stage a walkout as the trade dispute with Japan was hampering the carmaker's sales. Last year the impact of the Covid-19 pandemic again put a halt on industrial action.

This year, the pandemic and the global shortage of auto semiconductor seem to have contributed to the no-strike wage deal, although it was hard-earned.

The union was on the verge of striking after more than 70 percent of its 48,599 unionized workers agreed to a strike early this month. The National Labor Relations Commission also granted the union the right to stage a walkout.

"The management and the union sympathized with the difficult situation in the auto industry with the resurgence of coronavirus cases and the shortage of auto semiconductors," Hyundai Motor said in a release.

"The two sides will work together to enhance quality competitiveness and leap toward the global top tier in the future mobility era."

Kia, however, hasn't come to an agreement yet.

On Wednesday, Kia's labor union and the management failed to come to an agreement at the eighth negotiation session held at Kia's Sohari factory. The union will vote on staging a walkout and request the National Labor Relations Commission approve of the strike.

Kia's union is also requesting a 99,000-won raise in monthly base pay and a retirement age extension.