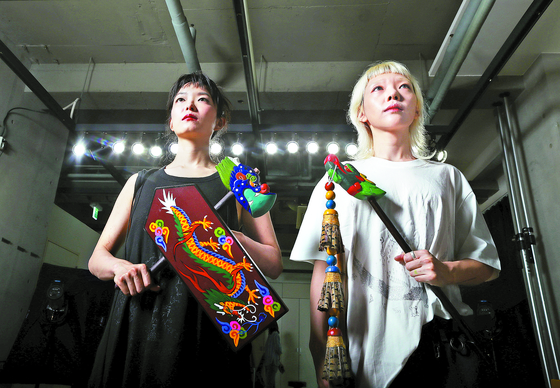 
Alt-electronic duo Haepaary members Park Min-hee and Choi Hye-won say they intentionally try to look cool-headed as “being friendly” is not what they aim for.

“Won’t the audience approach us out of curiosity if we aren’t so desperate?” says Choi.

Choi, 33, is a sound artist who works with sounds from traditional percussion instruments and Park, 38, is a professional gagok singer. Gagok, which is Korea’s National Intangible Cultural Heritage, refers to traditional songs (melodies attached to poems with fixed forms) sung with orchestral accompaniment.

The two formed a band amid the coronavirus pandemic last July.

They performed online at the “South By Southwest (SXSW)” music festival in March, and NPR introduced Haepaary’s single “A Shining Warrior – A Heartfelt Joy” as one of its favorite finds of SXSW 2021 on their weekly podcast, “All Songs Considered.” In May, they released their first EP “Born By Gorgeousness.”

Haepaary finally got to perform its first offline concert last weekend as part of this year’s Yeowoorak Festival at the National Theater of Korea in central Seoul.

The duo's music is far from normal. Although based on alt-electronic music, the pair performs a type of court dance called ilmu during a dance break of one of their songs. Haepaary also collaborates with digital painting, 3-D animation and glass artists to create an ocean-like stage.

“We basically combined elements of exhibitions and concerts into our performance. We sang on a stage that was decorated with video art and glass work, and we altered the atmosphere of the stage according to each song. We added a luminous jellyfish using stage lighting,” said Choi.

Haepaary describes its music as “[inviting] intimate strangers to its secluded party.”

“Our music allows people who can’t go clubbing due to Covid-19 to dance individually inside their homes instead,” said Park.

"We’re planning to create 3-D avatars and have them dance with us like [the girl group] aespa,” added Park. “We want to be a group that’s also visually appealing. I’ve always been interested in creating looks that suit the music I make, which includes fashion of course, and also other elements, like stage art.”

The members were elated with comments that their debut album, with songs like “A Shining Warrior – A Heartfelt Joy,” which sampled a part of Jeongdaeeop, a type of dance for the Jongmyo Jeryeak ancestral rites at Jongmo Shrine, was similar to singer Billie Eilish’s dreamy, techno aura.

“We were inspired by Billie while we were producing our songs. Although we don’t really have a role model, we do want to take after the cool aspects of different artists,” Park said. 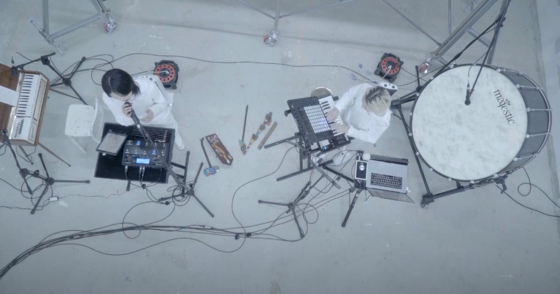 
One may wonder why the duo is so focused on “looking cool,” but the members have their reasons. “We’re a band based on gukak, but have you ever seen a ‘cool’ gukak group? You can probably find groups with an entertaining and bouncy image, but there aren’t any chic and sleek ones. Usually, when a band wants to become popular, they have no choice but to break away from their ‘cool’ image,” said Park.

“Most may not say it out loud, but all artists want to be cool. We just admit that we want to be, which is why we want people to like our music,” said Choi.

Their references, like Jongmyo Jeryeak, were sung exclusively by men. However, certain men, called yeochang, would sing female parts of the songs while those who sang the male parts were called namchang.

“While yeochang sang in falsetto and kept their legs together with one knee up uncomfortably, the namchang sat in a more comfortable cross-legged position. A namchang cares less about what others think when he sings — he can sing however he likes. We thought that looked cool, which is why we referenced it,” said Park.

Jongmyo Jeryeak and Namchanggagok, traditional Korean vocal genres sung exclusively by namchang, were supposed to be performed without emotion. However, Haepaary has given them a pop makeover.

“We weren’t trying to reinterpret it; we just made music we liked and sampled from [Jongmyo Jeryeak and Namchanggagok],” Park explained.

The duo majored in jeongga, a Korean traditional song, and percussion performance, but also created interdisciplinary art and music for traditional dance. They met back in 2017 when Park contacted Choi after seeing her solo performance. Choi looked back on the performance, saying that it was based on samples of numerous pieces of traditional music. Park said that she found Choi’s music at the time appealing, which is what made her to want to work with her.

Still, Haepaary stands firm in the opinion that it does not want to appeal to everyone. Its goal is to make “cool” music that “is chosen by a few members of the public.”