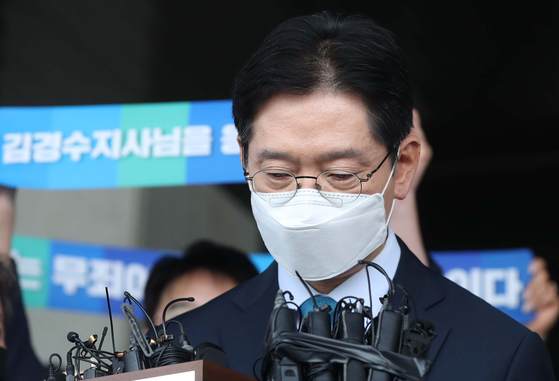 
South Gyeongsang Governor Kim Kyoung-soo lost his final appeal and was sentenced to two years in prison for conspiring with a political blogger to manipulate online public opinion to help President Moon Jae-in win the 2017 election.

The Supreme Court Wednesday upheld a high court ruling that Kim, a longtime political ally of Moon, was guilty of taking part in a major opinion-rigging operation to help Moon. The Seoul Central District Court initially convicted him in January 2019 and the Seoul High Court upheld the conviction in November 2020.

With the Supreme Court ruling, Kim lost his governorship. Elected officials automatically lose their seats if they are sentenced to prison terms for criminal convictions.

In 2018, Kim was indicted on charges of colluding with political blogger Kim Dong-won, better known by his online alias Druking, to mount an online campaign beginning in November 2016 to support Moon’s 2017 election bid. The blogger and his associates allegedly used a computer program to post and upvote thousands of comments on social media positive about Moon.

Moon won the snap election in May 2017, which came after his predecessor, Park Geun-hye, was impeached and ousted for corruption and abuse of power.

While convicting him of conspiring with the blogger to manipulate public opinion, the Supreme Court upheld the high court’s acquittal of Kim for an election law violation.

Prosecutors had argued that Kim violated the election law by promising the blogger a diplomatic post in Japan after the 2017 presidential election in return for his illicit work and Kim was found guilty of the charge in 2019 and sentenced to 10 months in prison. The high court in 2020 overturned the conviction.

Kim insisted on his innocence after the Supreme Court's verdict. “I will not give up the belief that truth will eventually return to its place,” he said in front of the South Gyeongsang Provincial Government office building shortly after the verdict. Kim's lawyers represented him at the hearing. "Unfortunately, there is no further way to find the truth in a courtroom. According to the Supreme Court’s decision, I will take my responsibility.”

Through his lawyer in a statement released later, Kim also said, “I am greatly disappointed at the Supreme Court. I am afraid that this judgment will be remembered as a flaw in the Supreme Court’ history.”

Special Prosecutor Heo Ik-beom, who investigated and indicted Kim, expressed satisfaction. “The court handed down a punishment on a politician for having influenced an election by manipulating online opinions through a private organization,” Heo said. “This is a warning to politicians that an election must be fair.”

The Blue House remained silent. “There will be no official statement from the Blue House,” said a senior presidential aide.

Ever since the so-called Druking scandal started in 2017, Moon has remained tightlipped about it. The blogger was convicted of online opinion rigging and sentenced to a three-year prison term by the Supreme Court in February 2020.

Kim is expected to be sent to the Changwon Correctional Institution based on his residential address. The prosecution started a process to imprison him, and it will take three to four days for Kim to start his jail term.

He was jailed for 77 days in 2019 after the district court convicted him and ordered immediate imprisonment. In April of that year, the high court released him on bail to allow him to work as governor and he went through the appeals without detention.

Kim, one of the closest allies of Moon, will be prohibited from running in an election for the next seven years.

Kim’s conviction isn't good for the ruling Democratic Party (DP) in the months leading up to the March 2022 presidential election.

The main opposition People Power Party (PPP) on Wednesday demanded an apology from Moon. “Today’s ruling will be a critical blow to the legitimacy of Moon’s presidency,” Rep. Hwangbo Seung-hee, spokeswoman of the PPP, said. “Even after the Supreme Court’s ruling, Kim shows no remorse, fueling the people’s anger. We want a sincere apology.”

Presidential candidates defeated by Moon in the 2017 election also demanded an apology from the president. Rep. Hong Joon-pyo of the PPP, People’s Party Chairman Ahn Cheol-soo and former Rep. Yoo Seong-min each challenged the legitimacy of Moon’s victory and demanded his apology.

“The judiciary confirmed that the current administration has a serious flaw in its legitimacy,” Yoon Seok-youl, former prosecutor general, said in a statement released through his spokesman.

He  said various attempts to manipulate public opinions will be made before the upcoming election.