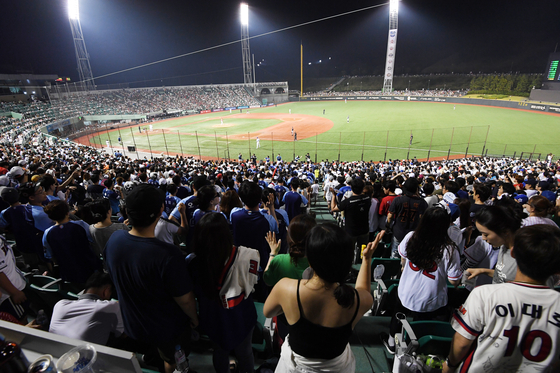 
The KBO on Tuesday afternoon canceled the 2021 All-Star Game, announcing that the event planned for this week won't go ahead to limit the spread of Covid-19 and protect players.

The decision didn't come as a huge surprise — the league had already been forced to cancel a week of games earlier in the month after an outbreak that started with three NC Dinos fans began to spread to other teams.

The three infected NC Dinos players — Park Sok-min, Kwon Hui-dong and Lee Myung-ki — along with teammate Park Min-woo have since been suspended for the rest of the season after it was revealed that the Covid-19 cluster was triggered by a gathering they attended that broke social distancing rules.

As well as players for the NC Dinos and Doosan Bears connected to that cluster, a KT Wiz coach separately tested positive on Monday.

According to the KBO announcement on Tuesday, the executive committee consulted with government agencies and decided that holding an event in the capital under the most stringent Level Four social distancing rules would not be difficult, especially considering the reported Covid-19 cases in the league.

The KBO has also canceled a planned exhibition game between the national baseball team and a team of KBO rising stars, which was scheduled as a tuneup game ahead of the Olympics.

The national team is instead set to face Futures League Sangmu squad on July 23, the LG Twins on July 24 and the Kiwoom Heroes on July 25 before heading to Tokyo.

While the All-Star Game won't go ahead, the KBO said that it will count fan votes that have already been cast and announce the selected All-Star squad at some point in the future, with individual awards also going to the players that were selected as the best 12.

The KBO is currently in the middle of an Olympic break, with games set to resume on Aug. 10.