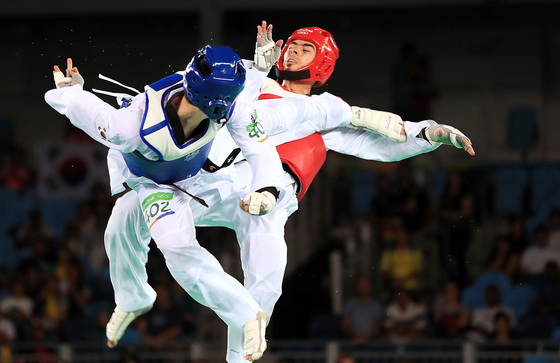 
Six Korean Taekwondo practitioners, three men and three women, will kick their way to gold at the 2020 Tokyo Olympics.

Taekwondo is a martial art performed on an octagonal mat, with the aim of kicking and punching the opponent using challenging techniques for higher points while avoiding being kicked and punched for three rounds of two minutes each. Penalties are given to practitioners who fall or exit the mat.

Taekwondo is often compared to Karate, which will make its Olympic debut in Tokyo. Despite both being popular forms of martial art, the main techniques are markedly different.

Karate focuses on the use of hands and upper-body work while Taekwondo is all about legs and kicks. Not only does Taekwondo emphasize kicking over punching, it limits punches to the body and not to the head.

While the legs are more grounded in Karate, high kicks aimed above the waist get extra points in Taekwondo.

This is why Taekwondoin, or Taekwondo practitioners, are fully equipped with head protectors and vests, called trunk guards, protecting the torso. 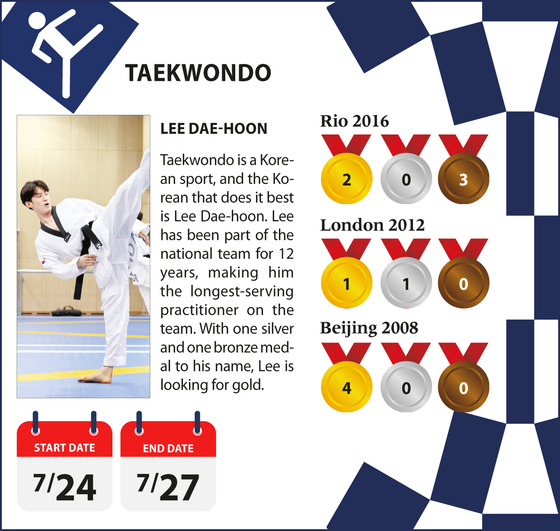 Taekwondo is a Korean sport. It first appeared as a demonstration event at the 1988 Seoul Olympic Games as an exhibition event, then made its official Olympic debut at the 2000 Sydney Games, where Korea won three gold medals and one silver medal.

At the 2008 Beijing Games, Team Korea won four of the eight gold medals available. In 2012, things took a turn for the worse, with just one gold and one silver heading home to Korea.

Lee Dae-hoon reached the Olympic podium for the first time in London, winning silver in the men’s flyweight.

Lee has been making history ever since, with a total of 27 international gold medals and a Rio Olympics bronze medal to his name. Lee even has the world ranking to prove it, spending years at the very top of the men’s featherweight world ranking.

Not only is he one of the best in the sport, he's also got longevity on his side. Having been called up to the national team at just 17, Lee has been representing Korea for 12 years, the longest anyone has ever been on the national team, and heads to Tokyo just one gold medal away from an Olympic grand slam. 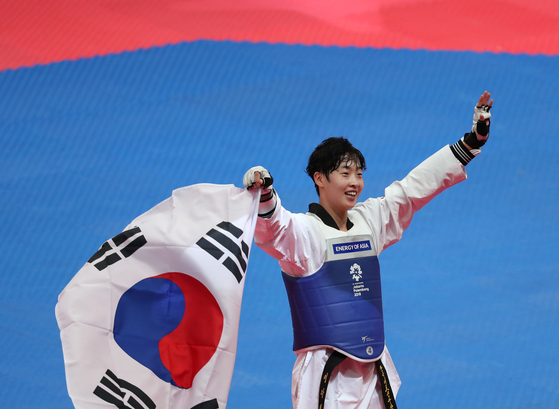 Lee Da-bin celebrates after winning the women's featherweight gold medal at the 2018 Jakarta Asian games on Aug. 21, 2018 at the Jakarta Convention Center in Jakarta, Indonesia. [YONHAP]


Alongside Lee, Jang Jun and Don In-kyo will compete in the men’s events, with Sim Jae-young, Lee Ahreum and Lee Da-bin competing in the women’s events.