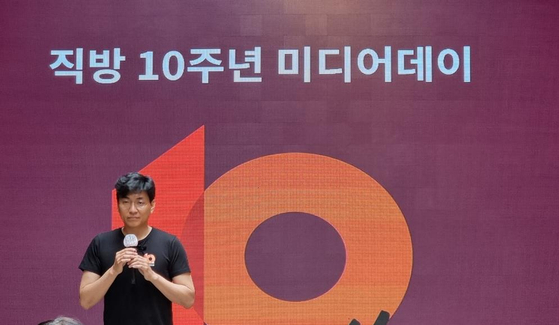 Zigbang CEO Ahn Sung-woo celebrates the start-up's 10th anniversary in Seoul on June 15. The real estate app was one of the three companies to become unicorns, whose values exceed $1 billion.[YONHAP]


Korea has a total of 15 unicorn companies, up by two from the end of last year.

Unicorns are startups that have such promise that they are valued at $1 billion or more.

According to the Ministry of SMEs and Startups on Thursday, three start-ups came into the unicorn category as of July 19 and one dropped out.

E-commerce behemoth Coupang lost its horn after the company went public in New York earlier this year, although its market capitalization was $68.7 billion as of Wednesday.

Unicorns do not include companies that have gone public or been bought in a merger or acquisition.

The government said that Korea has seen a total of 23 start-ups that made it to unicorn status.

One former unicorn was Woowa Brothers, the operator of Korea’s leading food delivery service, Baedal Minjok or Baemin, which was bought by Germany-based Delivery Hero in December 2019. Another is HYBE, the entertainment management company behind global music sensation BTS, which went public last year.

Krafton will lose its horn soon as it is in the process of an initial public offering (IPO).

Of the new unicorns, Zigbang, which turned 10 last month, is currently the market leader in the so-called "proptech" business, a portmanteau of the words “property” and “technology.” Its mobile app offers properties for rent or sale as well as market data and analysis, and it has an estimated market share of 50 percent.

Dunamu, the operator of cryptocurrency exchange Upbit, is one of the main players in the cryptocurrency business in Korea. It and competitor Bithumb are estimated to have 40 percent shares of the market.

Earlier this month, Kurly announced that it succeeded in raising $200 million in investment, and it plans to go public on the local stock market later this year.

The ministry noted the rise start-ups that have become powerhouses in their industries.

It lauded the “second start-up boom,” which is changing the Korean economy.

“Companies like Apple and Amazon, which began as start-ups, were able to grow into global companies with the help of innovative financing that turned their ideas into businesses,” Moon said. “We should also [provide loans] not based on real estate or past performance but on the possibility of future growth of companies based on ideas and technologies.”