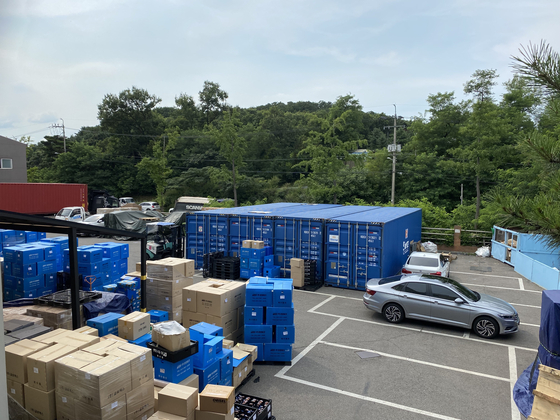 Izen's parking lot at Gimpo, Gyeonggi. Booking container ships is very difficult, and the company has been storing bidets in shipping containers in its parking lot until it can schedule exports. [KANG KI-HEON]


Exporters are having a hard time keeping up with orders due to container ship shortages.

Izen, a bidet manufacturer with its factory in Gimpo, Gyeonggi, set four 40-feet (12.2 meter) shipping containers in its parking lot in July last year. In them, the company stored bidets — not because there is leftover inventory, but because there are not enough ships to export them. The second floor of Izen’s headquarters, which used to be an office for eight employees, became a warehouse.

“After the shortage of container ships started in the second half of last year, we rented containers to store our bidets for export,” said Yoo Myung-jae, vice chairman of Izen. “Before the pandemic, there was no need to manage our inventory because we could immediately ship out exports, but since the second half of last year, we now have to arrange our production schedule around available container ship bookings.”

The company’s exports to the United States jumped post-Covid-19 due in part to a toilet paper shortage. They were 18 billion won ($15.7 million) last year, up 100 percent. The company’s overall revenue was 38.4 billion won, up 28 percent.

“Our U.S. buyers couldn’t sell our products because they didn’t have enough in stock,” said Yoo. “This year, we’re unable to rapidly respond to orders because we can’t book container ships.”

According to the company, this was the perfect timing for Izen to increase supply to the United States as only one percent of Americans own a bidet. But, the shortage of export ships held them back.

As of July, companies have to wait at least a month to book container ships to the Port of New York.

Izen was one of the lucky few, getting selected for a support program led by the Korea International Trade Agency (KITA) and shipping company SM Lines. Companies selected for the program are designated a spot on SM Line’s container ships, and Izen is shipping 10 twenty-foot equivalent unit (TEU) of bidets to the United States on July 24.

“For small- and mid- sized exporters like us, it would be much better if the government helped us by financially supporting rental fees of warehouses. Our biggest concern is how to deal with the prolonged supply chain disruption.”

Spot rates from Asia to the east coast of the United States was $5,334 per forty-foot equivalent unit (FEU) as of July 16, up 6.2 percent on-week and a record high. The Shanghai Containerized Freight Index (SCFI), an index reflecting freight rates on export container ships from Shanghai, was up 291.5 percent on year to 4,054.42 on July 16, also an all-time high. 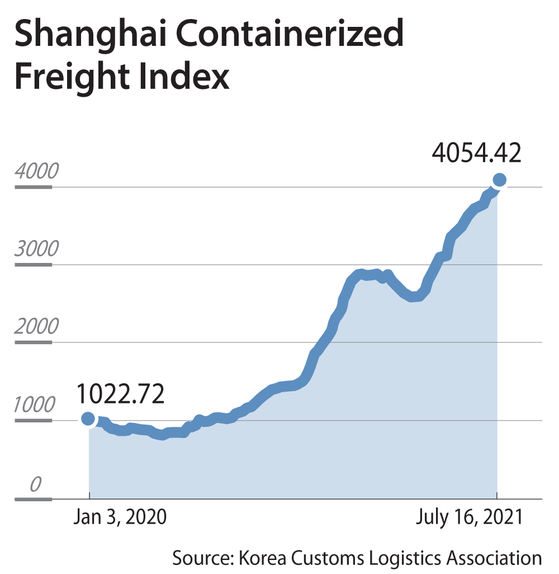 
The pandemic, the Suez Canal blockage of March causing congestion at ports worldwide, United States and China’s economic conflicts and other reasons are blamed.

“The shipping industry didn’t actively sign shipbuilding contracts because their industry was sluggish for a long time before the Covid-19 pandemic,” said Jo Seong-dae, a researcher at KITA.

The pandemic has also disrupted the sailing schedule of container ships, the domino effect still affecting exporters today. Ships go back and forth between ports, and the shutdown of container terminals the during peak of the pandemic and port operators having to stay at home pushed back overall global shipping schedules.

“If we can’t book enough ships to export our products, we delay some of the exports to next month,” said a spokesperson at a heavy equipment manufacturing company.

Experts expect freight rates to continue to increase at least until the end of this year, but many say it is hard to pinpoint the exact date for the peak. The Delta variant is emerging as a new threat to the global economy and oil and raw material prices are continuing to rise.

“Due to rise in oil and raw material prices, freight indices will continue to rise at least until the end of 2021,” said Jung Ho-sang, a professor teaching global logistics at Inha University. “The government needs to implement policies, such as tax benefits, to support small- and mid- sized firms heavily weighed down by shipping costs.”