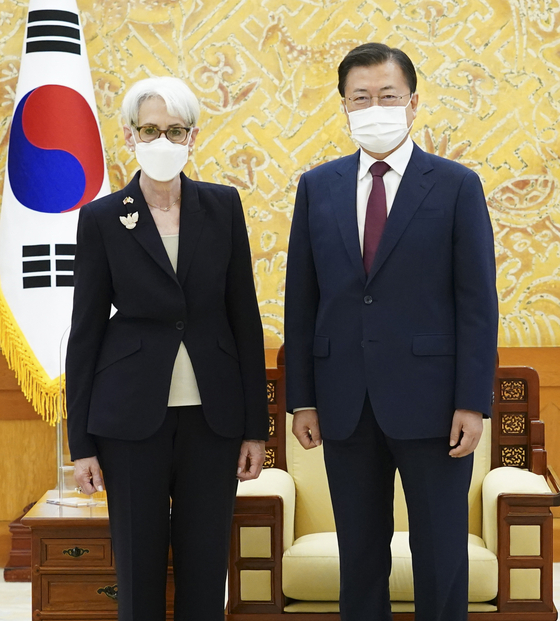 Korean President Moon Jae-in, right, poses with U.S. Deputy Secretary of State Wendy Sherman, left, in the Blue House on Thursday. Moon asked Sherman to play a proactive role for the resumption of talks between Washington and Pyongyang. [YONHAP]

President Moon Jae-in asked U.S. Deputy Secretary of State Wendy Sherman for her help resuming dialogue between Washington and Pyongyang during a meeting in Seoul on Thursday.


“President Moon [in the meeting] recalled the Korea-U.S. agreement from the summit in May to continue to work together through dialogue and diplomacy for the complete denuclearization of the Korean Peninsula and the establishment of lasting peace on the Korean Peninsula,” said Park Kyung-mee, presidential spokeswoman, in a statement on Thursday. "He requested Sherman's active efforts to resume dialogue between the United States and North Korea."

Sherman, following a meeting with her Japanese and Korean counterparts in Tokyo on Wednesday, had expressed hopes that Pyongyang would respond soon to Washington’s invitation to talk.

Reiterating her hopes in her meeting with Moon Thursday, Sherman also spoke of her intention to hold in-depth discussions about North Korea with her Chinese counterparts during her upcoming trip to China, Park said.


Sherman, leaving for Ulaanbaatar on Friday, is traveling to Tianjin on Sunday, where she is scheduled to meet Chinese Foreign Minister Wang Yi.