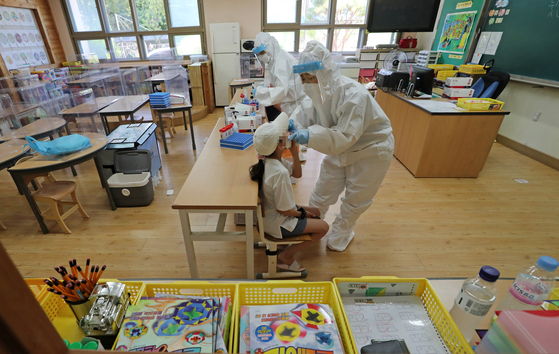 A child receives a coronavirus test at a testing site set up in an elementary school in the central city of Daejeon on Thursday. [YONHAP]


Korea reported 1,842 new coronavirus cases on Thursday, yet another daily record, with a mass outbreak on a Naval destroyer included in the count. 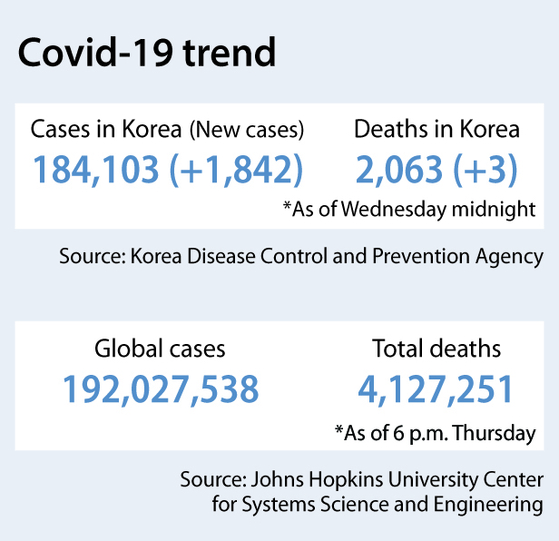 The Thursday surge came a day after the country reported a record 1,784 cases Wednesday.

“Korea is in the middle of the fourth wave of the pandemic, and outbreaks of more than 1,000 patients a day have been continuing for more than two weeks,” Bae Kyung-taek, a senior official at the Korea Disease Control and Prevention Agency (KDCA), said during a briefing Thursday.

There were 1,533 local infections, down 193 from the previous day, bringing the total caseload to 184,103, according to the KDCA data.

However, imported Covid-19 cases broke a record with 309 on Thursday.

This number includes 270 infected crewmembers who returned following an outbreak on the Navy’s Cheonghae unit destroyer, which was stationed in the Gulf of Aden in Africa.

Deaths of people with the virus were up three to 2,063.

While the highest level of restrictions in a four-tier system was supposed to end Sunday for the Seoul metropolitan area, new distancing rules will be announced by Sunday and they are likely to be extended.

"It is too early to tell if the new distancing system has had enough effect,” Sohn Young-rae, a senior health official, said Thursday. “We’re watching the virus pattern change in the greater Seoul area from day to day.”

Of Thursday’s local infections, 494 came from Seoul, followed by 363 from Gyeonggi and 130 from Incheon.

Seoul and Gyeonggi’s cases dropped slightly from the previous day, possibly due to the restrictions, which include a ban on gatherings of more than two people after 6 p.m.

Patients reported outside of greater Seoul rose to 546, or 35.6 percent of the total.

Daily cases outside the greater Seoul area topped 500 for two consecutive days for the first time since the first wave of the pandemic in February 2020, when the virus spread in Daegu and North Gyeongsang among followers of the Shincheonji Church of Jesus.

"Not only the Seoul metropolitan region but also non-capital areas are witnessing a sharp hike in new cases," Bae said. "Cluster infections continue to occur in everyday settings, including restaurants, bars, clubs and workplaces." 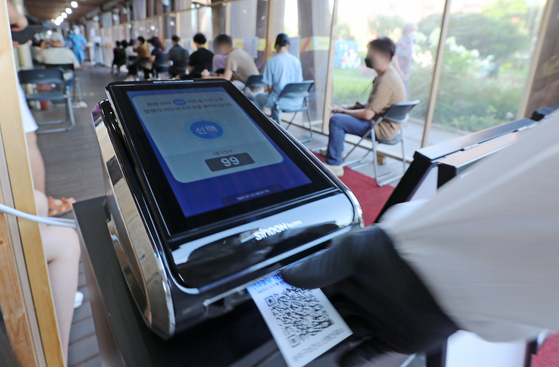 People take numbered tickets to wait their turns for Covid-19 tests in Songpa District, southern Seoul, on Thursday. Songpa District began a queue system at Covid-19 testing sites from Thursday so people can wait in a separate air-conditioned waiting area to get out of the heat. [YONHAP]


With Korea facing its worst wave of Covid-19 infections, data revealed by the KDCA showed that eight out of ten people in their 50s have booked vaccine appointments.

The government has refused to reveal the exact shipment schedule for the Moderna vaccine, saying it is confidential due to a contract signed with the pharmaceutical company, and concerns are growing over a shortage of Moderna supplies.

Health authorities then announced Thursday that a batch of 290,000 Modena shots arrived at Incheon International Airport on Thursday, and more than 4 million Moderna doses will arrive by the end of July.

In addition, Korea received 81,000 Pfizer vaccines Wednesday under a vaccine swap deal with Israel. These were in addition to an arrangement announced earlier.

“In an extension of the vaccine swap deal signed on July 6, an additional 80,000 doses arrived on Wednesday, following some 700,000 doses on July 7,” Baek Young-ha, head of Korea's vaccine procurement team, said Thursday.

“A total of around 780,000 Pfizer vaccines were exchanged,” Baek said.