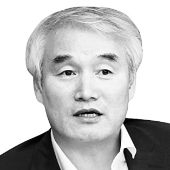 
The Ministry of Unification is the center of unification process. We want to reunite the divided Korea Peninsula to enjoy humane life in an integrated country which is stronger in political, economic and military terms. The ministry covers the entire peninsula. While other government ministries work with the premise of the current situation of the peninsula, the Unification Ministry prepares for changes in the peninsula.

For the ministry to carry out its mission successfully, sufficient human and material support is essential. It is better to promote the minister to deputy prime minister level — on the premise that the ministry manifests the will for reunification at home and abroad and does the job properly. The Korea Institute for National Unification and the National Institute for Unification Education need to be unified, and officials dealing with unification affairs need to be dispatched to major countries again and more often. There’s a long way to go, but the unification ministry’s existence is debated once again. It is more painful because it caused the trouble itself. 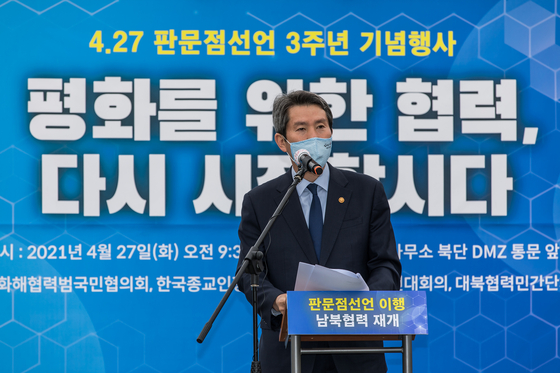 Unification Minister Lee In-young, a democracy activist during college days, makes a speech near the DMZ on April 26 to mark the third anniversary of the Panmunjom Declaration between President Moon Jae-in and North Korea leader Kim Jong-un. [JOINT PRESS CORPS]


Forget about the human rights lawyer-turned-president who has never proclaimed peaceful reunification based on liberal democracy, referring himself only as the “president in the south,” not sparing “praise and applause” for the North Korean dictator and describing him as “very frank, passionate and decisive on what’s going on in the world.” Forget about the unification minister devoted to respecting his boss no matter what he says.

It is the time for the unification ministry to look back on itself. Is there any other way other than inducing North Korean residents to recognize the system of South Korea as their future goal and encouraging them to voluntarily make a decision and work with us? The essential task is to show them the outside world and Korean society, let them feel how we want to be together, and win their hearts. Has the government dealt with defector success stories properly so that North Koreans could envy our society?

The Moon Jae-in administration repatriated North Korean defectors who are Korean citizens under our Constitution. It kept quiet when the North Korean regime used slander and recklessly criticized South Korean politics. Yet the government enacted a law banning the distribution of propaganda leaflets across the border to help restrict external information flowing to North Korean residents. The government ignored the death of a South Korean fisheries official who was shot and killed by North Korean navy in the West Sea. The unification ministry called for supplying aid to North Korea even after it blew up the Kaesong inter-Korean liaison office building, which cost 27 billion won ($23.5 million) in taxpayer’s money.

Is it because of the U.S. that inter-Korean exchanges and cooperation don’t work? Didn’t they know in advance that support of the U.S. was the condition for new economic map of the Korean Peninsula? Despite the sanctions by the international community, the government wants to facilitate exchanges with North Korean residents.

Didn’t the government learn anything from Germany’s “Realpolitik” of riding on America’s world politics, resolving the Berlin issue through basic treaties with East Germany, reunifying the country with the approval of the United States, and raising its own voice after the unification?