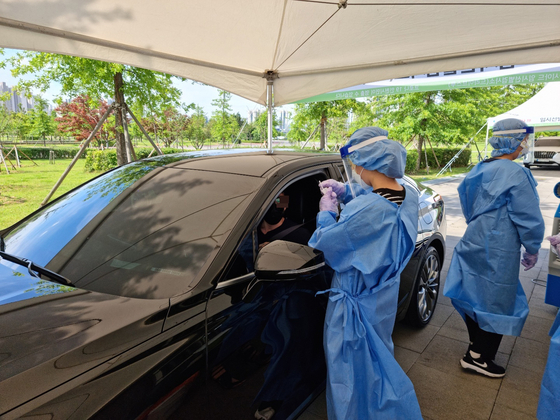 In the 1930s, Grand National Bank in St. Louis introduced the drive-thru teller window. Customers could stay in the car and make deposits by handing over the money to the teller behind the protective glass. This is considered the origin of the drive thru. In the United States, drive thru services became popular at hamburger joints near highways and other stores.

Korea’s first drive-thru store was the McDonald’s branch in Haeundae, Busan, which opened in 1992. These days, there are many drive-thru coffee shops, fast food stores and other services around the country. Most of them have a sign indicating that they offer drive-thru services for drivers.

Actually, the origin of Korea’s drive-thru business is the street vendors who suddenly appear whenever there is a traffic jam. They offer snacks like baked corn and chestnuts. If you spot people armed with wide-rimmed hats and arm covers in the distance, it means that you are entering heavy traffic congestion. Of course, their business is illegal and subject to crackdowns.

I thought the drive-thru system could only be used in commerce, but now it is also used in Covid-19 testing. Last year, Korean medical staff introduced drive-thru testing for the first time in the world. There is a low risk of infection while waiting, and it is more convenient for both offering and getting tests. It is actually complicated to install a drive-thru facility as it requires space for parking.

After the fourth wave of Covid-19, Seoul city is to expand drive-thru testing facilities. Mayor Oh Se-hoon had a video conference with district offices Tuesday and claimed it was a quick and safe method. “If space allows, it should be actively operated,” he said. At present, there are only two drive-thru test centers, both located in Seocho District, southern Seoul.

I agreed that it is needed, but at the same time, I feel bitter. The reappearance of the drive-thru testing sites imply that Covid-19 won’t go away for a while. As of Wednesday, 1,784 people have tested positive, the highest number ever. I miss the days when drive-thrus only reminded me of coffee.