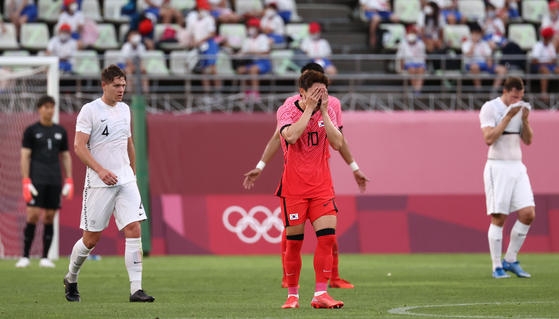 Lee Dong-gyeong reacts after New Zealand score the opening goal of a Group B football match at the 2020 Tokyo Olympics on Thursday. [YONHAP]


A lackluster Korean football team got off to a humiliating start to the 2020 Tokyo Olympics, losing 1-0 to presumed underdogs New Zealand at Ibaraki Kashima Stadium in Kashima City on Thursday.

The Korean team was on the attack from the start, keeping the ball solidly in the New Zealand half for the opening few frames of the game. Hwang Ui-jo got an early shot in the sixth minute, but unfortunately for both sides he found the New Zealand captain Winston Reid’s face rather than the back of the net.

Korea continued to push into the New Zealand half throughout the first 30 minutes, but actual shots on goal were few and far between. Attacks either broke against the New Zealand defense or petered out with badly-timed crosses and intercepted passes.

New Zealand held its own as well, moving into the Korean half for a few attempts on goal that suggested early on that the first match of the Tokyo Games wasn’t going to be quite the walkover that fans had hoped.

Despite a continued push on goal, neither team was able to get anything across and the first 45 minutes ended with the game tied at 0-0.

When the second half kicked off it was New Zealand that took the early initiative, moving the game firmly into Korea’s half. The Kiwis had an early opportunity with a corner in the 51st minute, but goalkeeper Song Bum-keun quickly snuffed out that chance and play moved back into the other half.

New Zealand were threatening again in the 61st minute, narrowly missing another corner thanks to another on-the-line save from Song. The Korean goalie was back in action just a few minutes later, preventing a New Zealand free kick from finding the back of the net as the young Taeguk Warriors struggled to get the ball out of their half.

After a grueling back and forth, New Zealand broke through in the 70th minute to score the first goal of the game. The goal by Burnley striker Chris Wood, originally ruled offside, was overturned after a VAR review, taking the score to 1-0 to New Zealand.

Kim Dong-hyun went off in the 78th minute for Jeong Seung-won.

Korea’s first attempt to respond came from a free kick in the 80th minute, but despite a lot of heads in the box, nothing came of the attack. The same was true of an 81st minute corner which petered out in front of goal.

The best chance came a minute later, when the ball was slotted to Song Min-kyu in the middle of the box. The Korean forward missed his footing and ended up essentially passing the ball to New Zealand goalkeeper Michael Woud.

Kim Hak-bum made one more change in the 87th minute, taking off Kang Yoon-seong for Park Ji-su.

The last-minute defensive change offered little help to Korea’s lackluster attack. An injury-time free kick petered away in front of goal, and the game ended with the young Taeguk Warriors off to a disappointing 1-0 loss to start what was supposed to be an easy introduction to the Tokyo Games.

Korea will continue its Group B action with a game against Romania at 8 p.m. on July 25. The final group stage game will be against Honduras at 5:30 p.m. on July 28.

Korea, generally ranked well above all three of the other Group B teams, ought to then progress to the knockout stage beginning on July 31.

Either way, Korea will likely face a considerable challenge in France, Mexico or Japan.

Two other games were held at the same time as the Korea-New Zealand clash, with Mexico beating France 4-1 to top Group A and Egypt and Spain drawing 0-0 in Group C.

Honduras and Romania were due to clash in the second Group B game later on Thursday night as of press time.