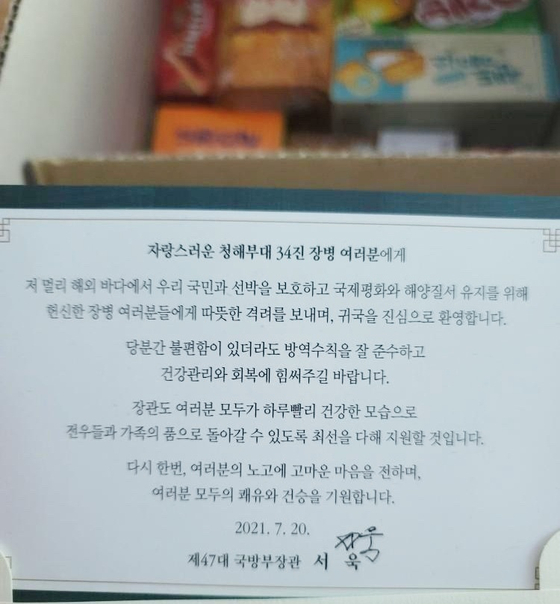 
Defense Minister Suh Wook is under fire for insensitivity after sending snacks as get-well gifts to sailors evacuated from Africa earlier this week due to an outbreak of Covid-19 on their ship.

One of the 301 crewmembers of the Munmu the Great destroyer, airlifted back from the Gulf of Aden on Tuesday told the JoongAng Ilbo that Suh sent a box containing bags of chips -- which he can barely eat.

“I have difficulty swallowing food because of the severe pain in my throat,” the sailor told the JoongAng Ilbo.

Of the 301 members of the Navy’s Cheonghae Unit assigned to the destroyer, 271 tested positive for the virus as of Friday.

“The Ministry of National Defense sent this box on Tuesday as a get-well gift,” the crewmember said. A photo of the box showed a letter from Suh wishing the members of the Cheonghae Unit’s 34th contingent a speedy recovery. Inside the box were bags of snacks commonly sold at supermarkets.

“I have lost my ability to smell and taste,” the sailor said. “I laughed bitterly after receiving this box.

“I came to wonder if this box was what I really get in return for my service and sacrifice for the country,” he said. “This country has abandoned us. I concluded that being a career solider is beneath me.”

Despite the serious situation inside the Munmu the Great, the military’s response was anything but serious, he said.

“Inside the ship, quarantine was meaningless,” he said. “We only got a few pills of Tylenol. We had to survive on our own.”

Suh and his ministry are facing a lot of criticism for the outbreak.

The Ministry of National Defense submitted a report on the evacuation operation of the 34th contingent of the Cheonghae unit to the National Assembly on Tuesday, Rep. Han Ki-ho of the main opposition People Power Party (PPP) said.

The report describes the operation glowingly.

“Through urgent phone calls with a defense minister of the concerned country, Suh managed to gain active cooperation of the country,” Ha quoted the report as saying. “It is a case in which Korea’s military diplomacy shined brightly.”

The ministry praised its own operation as “the first-ever large-scale overseas medical evacuation that the military accomplished within the shortest period,” according to Han.

“The ministry is praising itself over a disaster that angered the entire country,” Han said. “How dare they submit such a report to the National Assembly on the same day that the minister issued an apology?”

Earlier on Tuesday, Suh held a press conference and issued an apology to the nation for the infections on the ship. 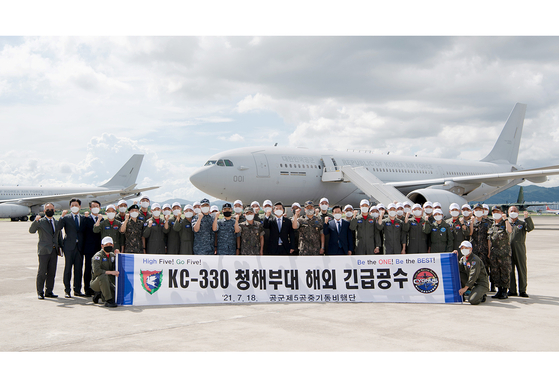 Defense Minister Suh Wook, center, poses Sunday with a team of the Air Force dispatched to the Gulf of Aden to evacuate the sailors of the Cheonghae Unit, where mass outbreaks took place in their ship. [AIR FORCE]

Suh had already faced criticism taking a souvenir photo with the evacuation operation team before their planes leave Gimhae Air Base on Sunday.