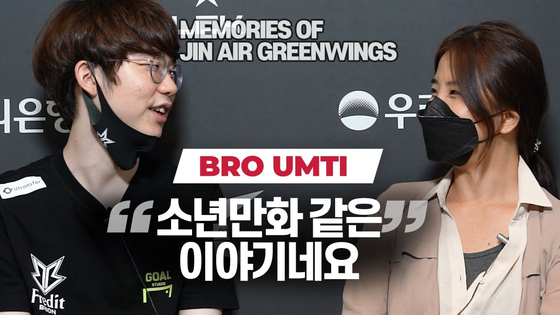 Fredit Brion's jungler and captain Um "UmTi" Sung-hyeon has revitalized his career this season after years of struggling with inconsistency. [KORIZON ESPORTS]


After Fredit Brion's 2-1 victory over DRX last Sunday, veteran jungler Um "UmTi" Sung-hyeon sat down for a chat in the LoL Park press area to discuss his memories of Jin Air Greenwings, Brion's team atmosphere and how he continues to motivate himself every day.


Q. Something that we notice whenever you play on stage, UmTi — you keep using the now-defunct Jin Air Greenwings logo as an emote. I wanted to hear more about it.

A. I consider Jin Air Greenwings the team as somewhat of a father figure for me, a teacher of sorts, the place where I was as raised as a student. That's how I see JAG, and that's why I keep the logo in my emote wheel as a sign of respect. I loved the organization and the players a lot, too. I keep using the logo because I always have them in my mind.

The memories I have of my time at JAG... they're wholesome. Those were beautiful days — the way I grew as a player, and my relationship with other players there. It's the team that taught me what kind of mindset I should have as a professional.

Back when I first visited JAG for a tryout, I was just a kid. I was looking to go pro almost as an afterthought. I told them that I visited simply because I enjoy playing the game. Then head coach Han "H-Dragon" Sang-yong told me off, saying that you can't become a pro with a mindset like that.

I was so caught off guard that day, since I was sort of a hot prospect in the market at that time, one of the more promising amateurs. But now, looking back, I realize I'm here now only because there were people who told me such things at that time. Because I had the JAG coaching staff, who brought me up to become who I am today.


Q. Sounds like a chapter from a shonen anime. And coincidentally, people say they get shonen anime vibes when they see Fredit Brion play. How would you describe what Brion means to you, then?

A. Fredit Brion is a team that uplifted me by giving me another chance as a pro, and continues to put that faith in me.

Maybe because I had such a great time at JAG, I tend to feel very loyal to my current team wherever I go, as if I'm seeing everything through rose-tinted shades. I usually think that as long as my team wants me, I want to stay with them.


Q. Your team strongly exudes a sense of brotherhood. How is Brion's internal team atmosphere?

A. I'd say that the bond between the players are strong, at least above average. We're close to one another. It's something I've said many times before, but everyone here shares a feeling of desperation, because all of us have experienced failure in our careers. That shared background helps us understand each other even better.

Desperation for success can slip away easily. People forget things, right? Man is a creature of oblivion. But at Brion, whenever I lose my desperation, my teammates and friends quickly help me find my focus.


Q. I recently had a conversation with another player about burnouts. He said he would rather win the LCK once, burn himself out in the process, then walk away, rather than make it to the playoffs six times but then fade away from people's memories. What's your take on this?

A. Well, I've never been to LCK playoffs, so I can't really relate to what he is describing. I've never won a big trophy, except for maybe when I was an amateur player. I'm very much caught up in living day to day, to be honest. I don't think about the future or the past that much, because I'm out of breath just living the present.

You mentioned burnout, but the very concept of a burnout is a luxury for players like me. I'm not even at the caliber to complain about burnouts. In my case, I think it's better to start thinking things when they actually happen.

One big motivation for me is becoming the first player past thirty to professionally compete in League of Legends. A while ago, I even changed my solo queue handle to "the pro that stayed around the longest" to reflect this goal. By achieving that, perhaps, I'll become a player that won't be forgotten.