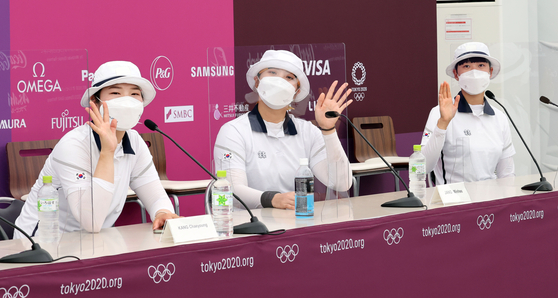 Kang Chae-young (left), Jang Min-hee and An San pose for the cameras at their press conference after making it through the women's ranking round, on Friday. [YONHAP]


The Korean women's archery team got off to a perfect start at the 2020 Tokyo Olympics, with all three representatives besting a 25-year-old Olympic record as they passed through the competition's preliminary stage, held at the Yumenoshima Park Archery Field in Koto City, eastern Tokyo, on Friday morning.

Korea's An San won the ranking round by posting a score of 680, topping the previous Olympic record of 673 set by Ukraine's Lina Herasymenko in 1996. Jang Min-hee and Kang Chae-young also bested Herasymenko's mark by posting 677 and 675, respectively. None of the three scores, however, threatened the ranking round world record — 692 — set by Kang at the 2019 World Archery Championships.

An, Jang, and Kang took the top three spots in the ranking round; coming in fourth was Mexico's Alejandra Valencia, with 674 points. Each archer shot 72 arrows from a distance of 70 meters. An and Kang shot a 10 with half of their arrows, or thirty-six times. Jang shot thirty-two 10s.

Having performed the best in the ranking round, An will also get to represent Korea in the newly created mixed team event — in which only one male and one female archer participate — alongside Kim Je-deok, who posted 688 points in the afternoon to win the men's ranking round. The two now have a chance to become the first archer in Olympic history to win three gold medals.

The three women's combined point total of 2,032 also was a new Olympic record. The previous record was set at the 2008 Beijing Olympics, at which Korea finished with 2,004 points.