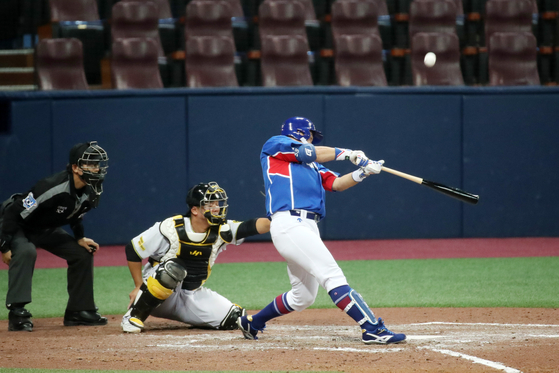 Choi Joo-hwan hits a three-run home run for the national baseball team in a tuneup game against Sangmu at Gocheok Sky Dome in western Seoul on Friday. [NEWS1]


The Korean Olympic baseball team beat the Futures League military team Sangmu 9-0 in their first tuneup exhibition game on Friday, relying on strong pitching and a few explosive innings to take their first win playing as a team.

Won Tae-in of the Samsung Lions led things off, throwing three quick innings without giving Sangmu a chance to get anything going. The dominant pitching performance continued, with the  Futures League club only managing four hits throughout the game.

Offensively the national team managed to get one across in the first, before Park Hae-min, also of the Lions, really got things going in the second with a bases-clearing triple that quickly took Korea up 4-0.

The national team added one more in the second before going quiet for a few innings, returning in the seventh to add four more runs including a three-run homer from prolific slugger Choi Joo-hwan of the SSG Landers.

The national team will go on to face the LG Twins otoday and the Kiwoom Heroes on tomorrow before heading to Tokyo on Monday. A planned game against a group of young KBO players has been canceled due to a spike in Covid-19 cases.

Korea's first game in Tokyo will be against Israel on July 29. Won is likely to be picked as the starter for that game.