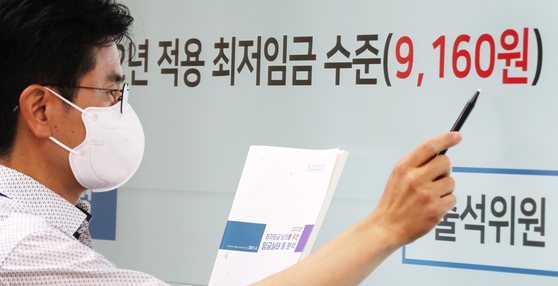 An official looks at a digital screen displaying that next year's minimum wage will be set at 9,160 won ($7.95) at the government complex in Sejong. [YONHAP]


Business lobbying groups are urging the government to re-deliberate next year's minimum wage, saying it is too high.

The Korea Enterprise Federation (KEF) announced Sunday that it submitted an appeal letter to the Ministry of Employment and Labor on Friday, opposing next year’s minimum wage of 9,160 won ($7.95). The Korea Federation of SMEs (KBIZ) also called on the labor ministry to reverse its decision on July 19.

“The minimum wage increase was an unreasonable decision that didn’t fully consider small- and mid- sized enterprises (SMEs), small business owners and the employment situation of lower socioeconomic status groups — the very people who will be directly affected by minimum wage changes,” said Ryu Ki-jung, a senior official from KEF.

KEF says that there is no reason to raise the minimum wage at high rates, based on the four criteria stated in the Minimum Wage Act — employees’ living expenses, wages of similar employees, possible increase in labor productivity and effect in income distribution.

According to KEF, Korea’s current minimum wage pays 61.3 percent of what full-time workers would receive on average. That ranks Korea's minimum-wage-to-average-wage-ratio at No. 8 out of all Organization for Economic Cooperation and Development (OECD) countries. The organization further stated that labor productivity will not increase as much as the rate of minimum wage increase, and high increase is not necessary since monthly minimum wage is already higher than living expenses of low-wage single households.

There are no past cases where the government re-deliberated on minimum wage, but KEF remains firm.

"Just because there is no precedent doesn’t mean that submitting a letter of appeal should be seen as meaningless," said a spokesperson for KEF. "The government should stop neglecting the desperate pleas of businesses and formally review reconsidering the minimum wage."

Lawmakers including Rep Choo Kyung-ho, Kweon Seong-dong, Jung Hee-yong and Choi Seung-jae of the People Power Party (PPP) proposed a bill aiming to vary the minimum wage by business size, sector and region. Rep. Yun Hee-suk of the PPP proposed a bill that obliges the government to take average rate of wage increase and economic growth outlook into consideration when deliberating minimum wage. But all bills are pending at the standing committee.

“Minimum wage is a must for employees to maintain a stable livelihood, but if small businesses are affected, then there are no jobs or monthly pay,” said Rep. Choi Seung-jae. “The harm from increasing minimum wage directly goes to socially vulnerable groups such as temporary workers, day laborers and low-socioeconomic status households.”