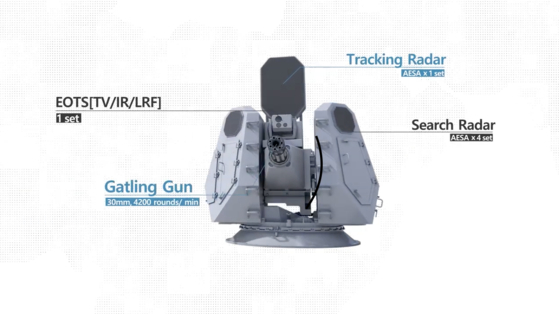 A breakdown of the radar and weapons components included in the CIWS-II developed by LIG-Nex1. [LIG-Nex1]

LIG-Nex1 is likely to be selected as the operator for the localized version of the Close-In Weapon Systems-II (CIWS-II), the development of which is being spearheaded by the Korean government to enhance naval defenses, according to the company on Sunday.

An LIG-Nex1 spokesman said the company received the highest score during an evaluation of proposals for the CIWS-II system development project being promoted by the Defense Acquisition Program Administration (DAPA).

As a result, LIG is expected to be selected as the preferred bidder for the CIWS-II system development project.

DAPA plans to begin developing CIWS-II within this year and invest 320 billion won ($277.7 million) into completing the project by 2030.

CIWS-II is a crucial point-defense weapon system for detecting and destroying short-range missiles and enemy aircraft that penetrate outer defenses. It is typically mounted shipboard in a naval capacity. Nearly all classes of larger modern warships are equipped with some kind of CIWS device.

A CIWS-II system on a ship is activated if enemy missiles break through the defenses of surface-to-air anti-missile systems.

DAPA’s local development project for an indigenized version of the CIWS-II will make use of domestically-developed active electronically scanned array (AESA) radars in order to implement more accurate and faster surveillance and tracking functions compared to the currently deployed mechanical-type radars.

LIG-Nex1’s CIWS-II uses the same barrel specifications and ammunition loading system as the Goalkeeper weapons system currently employed by the Korean Navy, which was developed by the Dutch company Thales.

The spokesman added that the localized version of the CIWS-II, which will be likely developed by LIG-Nex1 in the future based on the outcome of the preliminary proposal evaluation, will be mounted on the latest Navy warships, including Hyundai Heavy Industries’ KDDX-class destroyer due to be launched after 2025, the FFX Batch-III or Ulsan-class frigates, which are also being developed by Hyundai, and light aircraft carriers currently under development.

LIG-Nex1 previously showcased a model of its CIWS-II system at the International Maritime Defense Industry Exhibition in Busan in early June.