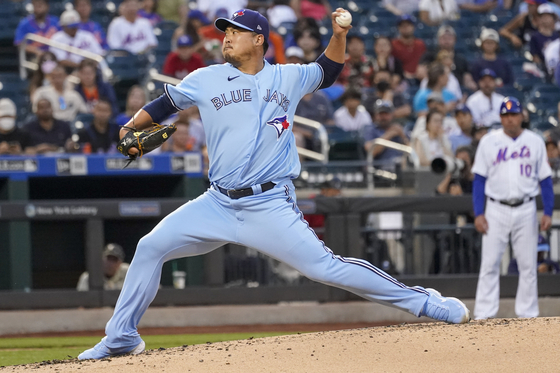 
Ryu Hyun-jin struggled to a no decision on Saturday, giving up three earned runs off ten hits in four and one third innings against the New York Mets.

The Toronto Blue Jays went on to win the game 10-3, with Trevor Richards earning the win after Ryu was taken out in the fifth inning.

Ten hits in one game is Ryu's worst outing this season, although luckily for the Korean ace, the New York club wasn't able to capitalize and drive in more runs.

Ryu looked unusually shaky from the start, giving up a double to the first batter he faced followed by a walk, before rallying for two strikeouts with a fielder's choice ending the inning.

The second looked more comfortable, with Ryu opening with a groundout before giving up a single, only to force a quick double play. The third was the only inning in which Ryu gave up no runs, with two strikeouts and a lineout sending the Mets down in order. Meanwhile, the Blue Jays got three across in the inning to take an early lead.

Ryu gave up two singles in the fourth, but a flyout and another double play took care of the danger.

The fifth inning started with a pop out, but then things started to fall apart. A one-out single was quickly followed by a double to put runners on second and third, followed by another single to bring home the first run. With runners at the corners, Ryu gave up two more singles, bringing home two more runs to take the score to 3-3.

With the playing field leveled, Ryu was taken out of the game for Richards.

Ryu's ERA increased to 3.44 after the game, with his win-loss record for the season still at 9-5. He will have to wait a little longer for that elusive 10th W.

Despite having a tough outing on Saturday, Ryu is still having a good July. For the month, Ryu has two wins, one loss and one no decision with a 2.81 ERA with five earned runs in 16 innings pitched with 13 strikeouts and five walks.

While Ryu struggled on the mound, Kim Kwang-hyun is in the midst of a dominant five-game winning streak. 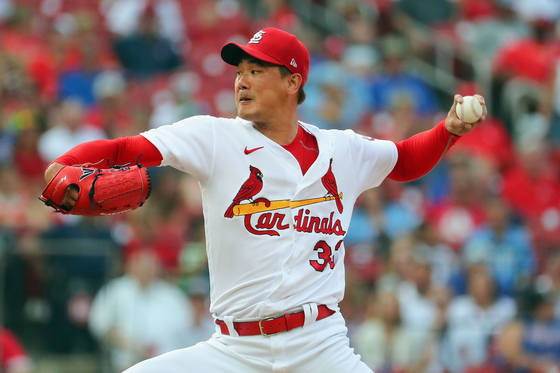 Kim Kwang-hyun of the St. Louis Cardinals delivers a pitch against the Chicago Cubs in the first inning at Busch Stadium on July 22 in St Louis, Missouri. [AFP/YONHAP]


Kim on Thursday led the St. Louis Cardinals to a 3-2 win over the Chicago Cubs at Busch Stadium in St. Louis, Missouri.

The win, which fell on Kim's 33 birthday, continued a phenomenal July for the starter. Kim now has a 0.72 ERA for the month with two earned runs in 25 innings pitched with 17 strikeouts and six walks.

Thursday's came capped off an emotional week for Kim. On July 18 he pitched a dominant win against the San Francisco Giants with his wife and children in the crowd for the first time in his major league career.

On Thursday, Kim had to wave them off at the airport before the game as they head back to Korea and the southpaw once again faces a lonely life on the field. At Busch Stadium, however, Kim has very quickly become one of the most important members of a family of thousands, and he doesn't look like he's ready to stop anytime soon.

Ryu lands on 10-day IL after rough start to season