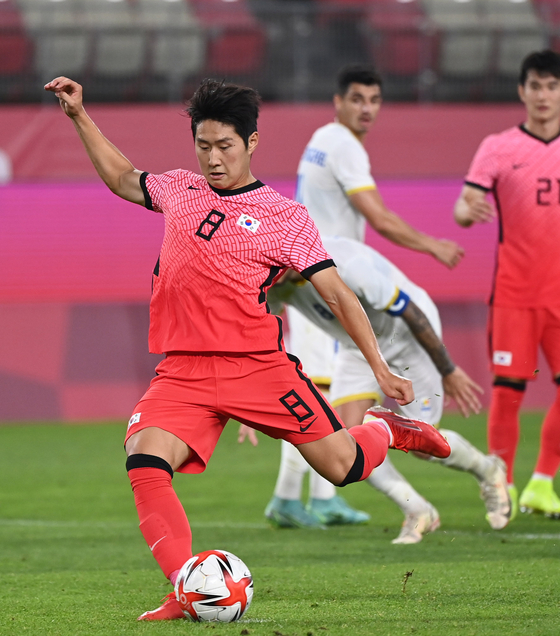 Lee Kang-in scores a penalty against Romania in a Group B game at the 2020 Tokyo Olympics on Sunday. [JOINT PRESS CORPS]


The Korean Olympic football team beat Romania 4-0 in their second Group B game at Ibaraki Kashima Stadium in Kashima Japan on Sunday night.

The U-23 team, looking for redemption after an unexpected 1-0 loss to New Zealand in their first game on Thursday, struggled at the start of the game, unable to get anything across for the first 30 minutes.

The first goal actually didn't come from a Korean boot, with Romanian player Marian Marin unfortunately sliding into a Korean cross and sending it flying neatly past his own goalkeeper.

Romania's woes continued in injury time at the end of the first half, when Ion Gheorghe received a second yellow card and was sent off, leaving the European side with 10 men for the whole of the second half.

Having relied more on Romania's mishaps than their own success in the first half, Korea came alive in the second half.

The second goal was credited to Um Won-sang in the 59th minute, a long ball sent flying through the box that deflected off a goalkeeper and curved into the far left corner.

Up 2-0, Korea started to look more confident and spent most of the second half on an all out offensive. Goal number three was an Lee Kang-in penalty in the 83rd minute, with Lee adding one more in the 90th minute, picking up a pass from Kang Yoon-seong in the box and hammering it home for the 4-0 win.

The big 4-0 win is a huge confidence boost for a young squad that likely headed to Japan expecting an easy path through the group stage and had a rude awakening last week. Korea's defense — always a concern with the young squad — looked stronger, although it wasn't tested that much during the game.

Issues still remain. Korea gave up an indirect free kick in the box in the first half on a picked up pass back, an error that isn't often seen in top-flight football.

Despite the scoreline, the attacking wasn't always confident — Song Min-kyu on the left wing in particular seemed to be scared of the goal, rushing to give the ball away every time he was put in front of the net.

Yet issues aside, it was a big 4-0 win and it puts Korea on top of Group B on goal difference alone. All four teams — Korea, Honduras, New Zealand and Romania — now have one win and one loss each, but Korea is the only one to do so with four goals.