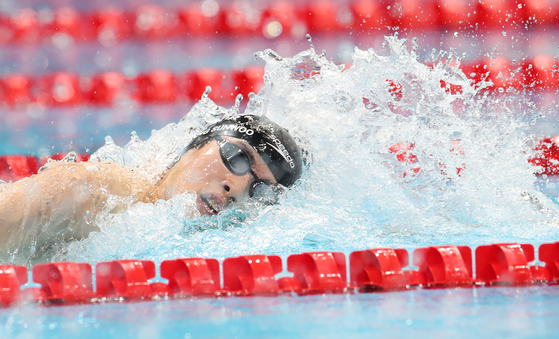 Hwang Sun-woo competes during the men's 200m freestyle heat at the Tokyo 2020 Olympic Games in Tokyo, Japan on Sunday. [XINHUA/YONHAP]


Hwang Sun-woo broke the Korean record for the men's 200-meter freestyle in the preliminary stage on Sunday, topping the table for the round.

Hwang finished first with a time of 1:44.62 in the men's 200-meter freestyle preliminary round at the Aquatics Center in Tokyo on Sunday. Swimming star and three-time Olympic medalist Park Tae-hwan set the previous Korean record of 1:44.80 at the 2010 Guangzhou Asian Games. Hwang beat that time by 0.18 seconds.

Hwang advances to the semifinals on Monday morning, where 15 other swimmers will compete. The top eight will advance to the finals scheduled to take place early Tuesday.


Hwang has been on good form even before the Olympics, having taken down Park’s longstanding 100-meter freestyle national record with 48:25 at the 2020 Korea national team trials in November, 2019.

At the same trials, he reached new heights as he set a new junior world record at 1:45.92 in the 200-meter freestyle race. He has been swimming even faster since, having beaten his own record by a full second at 1:44:96, putting him just 0.31 seconds behind the 2016 Rio Olympics gold medal record.

Hwang's preliminary round time would have earned him gold in Rio.