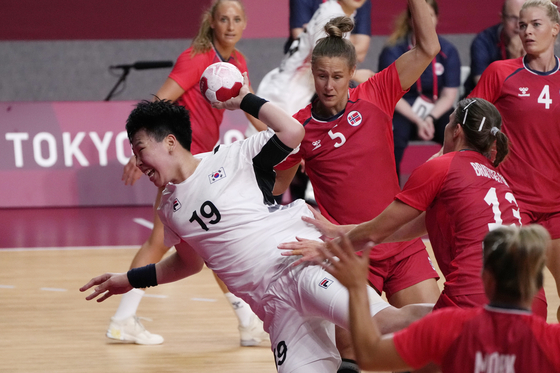 Kang Eun-hye, left, tries to score during the women's Preliminary Round Group A handball match between Norway and Korea at the 2020 Tokyo Summer Olympics on Sunday, in Tokyo. [AP/YONHAP]


The Korean women's handball team lost 39-27 to Norway in their first Group A preliminary round match on Sunday.

Korea seemed to be off to a good start, opening the scoring 2-0 with consecutive goals from Sim Hae-in and Lee Mi-gyeong.

Just a minute in, Korea’s chance seemed to have come, as a Norwegian player received a two-minute suspension and was pulled out of the game.

But Korea was unable to convert the chance to more points, allowing fast attacks from the Norwegian side and slipping behind 11-4.

With the tide on the Norwegian side, the first 30 minutes finished 18-10.

The second half started with Nora Moerk’s point assisted by Kari Dale Brattest of Norway and the score reached 20-10, Norway scoring twice as much as Korea.

At 20-11, Ryu Eun-hee added two points in a last-ditch attempt to catch up with the opponent, but Korea rarely found a chance to do so in the second half and finished 21-17, the total score at 39-27.

Shim scored the most points for Team Korea with five points, while Jung slotted in four goals and Ryu added three.