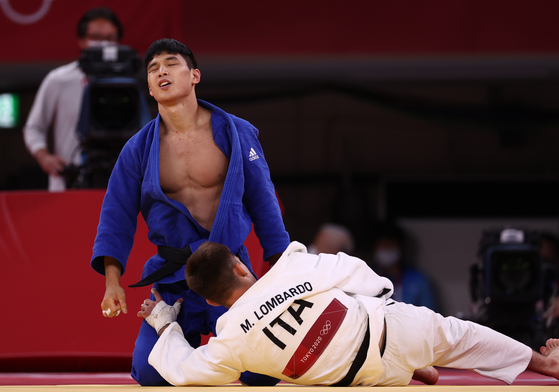 An Ba-ul reacts after beting Italy's Manuel Lombardo to win bronze in the men's 66 kilogram event at the 2020 Tokyo Olympics. [YONHAP]


Judoka An Ba-ul won bronze in the men's 66 kilogram event at Nippon Budokan in Tokyo on Sunday, beating Manuel Lombardo in the bronze medal contest.

An, the world No. 3, beat No. 1 Lombardo in normal time, scoring an Ippon, the equivalent of a knockout punch in boxing that means a judoka threw or took down an opponent so as to subdue them and end the bout immediately.

An fought a total of four bouts throughout Sunday, first beating Ian Sancho Chinchila of Costa Rica in the round of 16. In the quarterfinals he took on Slovakian judoka Adrian Gombac, beating him with an Ippon as well.

The semifinal was a tough fight against Vazha Margvelashvili or Georgia, with An eventually emerging on top after over six minutes.

An is a two-time Olympian, having previously won silver at the 2016 Rio Olympics. Despite being a former judo prodigy and a big name, he nearly missed out on Tokyo after being suspended in 2019 for fabricating community service records.