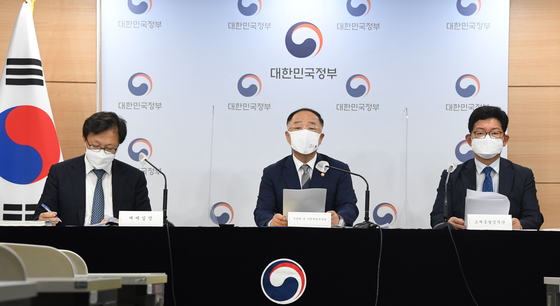 Finance Minister Hong Nam-ki attends a press briefing on tax reforms at the government complex in Sejong on Friday. [MINISTRY OF ECONOMY AND FINANCE]

The government's latest tax reform proposals aim to support people that have been most affected by the Covid-19 pandemic including small- and medium-sized enterprises as well as small businesses forced to close due to the resurgence of the virus and the social distancing regulations.

In addition, the government is increasing tax incentives especially in key strategic industries — semiconductors, batteries and vaccines — where the goal is to encourage investment and R&D research in preparation for the post-Covid-19 era.

However, allowing people to pay their taxes in art donations, which was one of the key issues, was taken out at the last minute.

One of the key reforms is allowing SMEs to carry back their losses caused by Covid-19 by two years, instead of the previous one year.

Additionally, suspending tax payments and forced execution has been expanded in helping those that are in a critical situation or have gone out of businesses while owing taxes.

Currently, the government only permits a suspension for people whose annual earnings in the last three years were 1 billion won ($873,000) or less. The taxes that the companies owe have to be less than 50 million won and their overdue payments in the last five years have to be three or less a year.

While the condition on the amount owed as well as the overdue payment restrictions remain the same, the bar on annual earnings has been raised to 1.5 billion won.

This temporary suspension, including seizing properties, was supposed to expire by the end of this year, but was extended to end of 2023.

For self-employed businesses that were driven out of business, the government has decided to waive late fees on a program in which they can payback owed taxes in installment over a maximum five years.

The number of small business owners that can apply for such a tax program has also been expanded from those that went out of business in July last year to those that closed shop in July 2021.

However, to be eligible, the average annual earnings in the last three years have to be less than 1.5 billion won and the owed tax less than 50 million won.

“While economic indicators from both home and abroad are showing a vivid economic recovery, reinforced social distancing was inevitable due to the fourth Covid-19 wave including the spread of the Delta variant,” Finance Minister Hong Nam-ki said Friday. “As a result, the difficult situation of people in a vulnerable situation including low-income families and small stores owners has worsened.”

The Finance Minister said equally important to the fiscal spending is the tax reforms that provide direct support to livelihood.

“[This year] we have created or extended necessary tax supports for each different class, from SMEs and workers to small business owners and farmers and fishermen,” Hong said. The goal is to help overcome the crisis while boosting economic recovery.

In providing support on key strategic industries and restructuring the economy, the government, as announced earlier in May, has raised the tax credits for research and development (R&D) investment up to 50 percent.

This represents a 10 percentage point increase from the current maximum 40 percent credit for R&D investment.

The semiconductor, battery and vaccine industries are eligible for the upgraded credit.

The government has also added carbon neutrality related technology and biopharmacy to the list of 235 technologies that benefit from the maximum 40 percent R&D tax credit.

These tax credits are only applied until the end of 2024.

In helping small start-ups, the government has also decided to ease its regulations on those that receive tax deductions.

Currently, start-ups get a tax deduction of a maximum 50 percent for five years. Those that open up outside of major cities get a deduction of 100 percent.

The requirement is to have an annual income of 48 million won or less. That bar has been raised to 80 million won.

The government estimated that the eased regulations will have the same effect of the government providing support worth 370 billion won a year.

Additionally, in encouraging businesses to increase employment, the government has increased the tax credit on employment while extending it for another three years until the end of 2024.

The government will be promising a maximum 13 million won in tax credits for SMEs for three years for each employees hired, which is up from the current 12 million won, and for conglomerates 5 million won instead of 4 million won.

That tax credit annually is estimated to amount to 1.28 trillion won.

The government also has decided to ease the regulation on the 30-percent tax deduction on SMEs that hire women that have been rehired after cutting their careers short due to personal reasons including raising a family.

Until now, the condition to get a tax credit is when the woman hasn’t been working for a minimum of three years. The new tax reform has eased that condition to two years.

The government estimated that the changes will likely result in the government collecting 1.5 trillion won less in taxes in the next five years.

Especially, the biggest losses will come from corporate taxes, which the government estimated to amount to 1.3 trillion won, while it expects 331.8 billion won less collected in income tax.

“If you see it in another direction, that’s how much tax supports is being provided[for people and areas that are in need],” said Finance Minister Hong. “The tax credits on R&D and investment in national strategic technologies is substantial and support of people in vulnerable situations including low-income families also takes up quite a portion.

“We weren’t intentionally targeting the amount of taxes that could shrink but that’s the end result after making changes to the tax system in necessary areas.”

The Finance Minister said the government will try to balance the reduced tax by going after tax evaders.

Taxation regulations against Controlled Foreign Company (CFC), which are companies in which Korean residents own substantial stakes located in offshore tax havens, will be tightened.

Currently, the CFC regulation, in which the government imposes taxes on interest and dividends from shares and bonds owned, applied to those located in tax jurisdictions with rates of 15 percent or lower.

The newly reformed tax standard will be raised to 17.5 percent. This will target more companies that have set up companies in tax havens to dodge Korea’s corporate taxes.

This is the first time that the regulatory standards have been raised since the anti-avoidance regulation was enacted in 1996.

One controversial tax reform, the government accepting art donations as tax payments, was not included.

Earlier, the government had said it would accept art donations as tax payments.

The issue was raised after Samsung Group Chairman Lee Kun-hee passed away in October 2020, leaving his surviving family members with an inheritance tax of 12 trillion won.

As the amount that the family had to pay was astronomical even for Korea’s richest family, there were those that raised the possibility of the government accepting the art of the late Samsung patriarch as taxes.

While Samsung donated 23,000 pieces of art owned by the late chairman, the family has agreed with the tax agency to pay its inheritance tax in installments over the next five years while the donated works weren’t accounted.

“We were hoping to have art donations for taxes implemented starting 2023,” said Finance Minister Hong. “[But after discussing it with the ruling Democratic Party], it was concluded that more discussions should be made.”

The government plans to submit the tax reform bills to the National Assembly in September along with next year’s budget proposal.