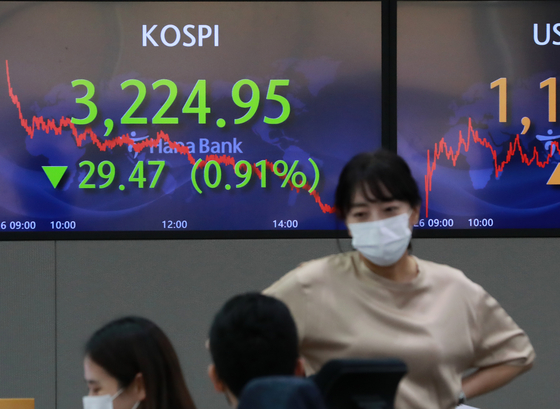 
Stocks retreated nearly 1 percent Monday as investors remain cautious about the local resurgence of the new coronavirus and uncertainties from China's clampdown on tech firms. The won fell against the dollar.

Trading volume was moderate at about 813 million shares worth some 12 trillion won ($10.4 billion), with losers outnumbering gainers 662 to 212.

Stocks retreated after a two-day gain, as the spiking virus cases sapped demand for risky assets.

"Investors seem to be risk-averse ahead of the release of the U.S. GDP and the Fed meeting, with China's tech reform issue delivering a negative impact on the local stocks prices," Shinhan Investment analyst Choi Yoo-joon said.

The local currency closed at 1,155 won to the dollar, up 4.2 won from the previous session's close.