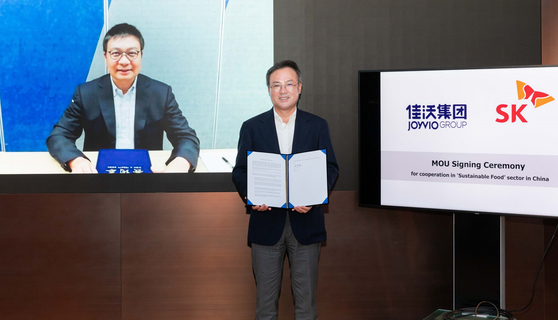 SK Inc. CEO Jang Dong-hyun poses after signing an agreement with his counterpart from China's Joyvio to create a 100-billion-won fund on Monday in central Seoul. [SK INC.]

The Korean company will invest 18 billion won, the company announced on Monday, while the contributions of the others were not detailed.

The primary target will be food tech start-ups focusing on producing plant-based meat and fermented alternative proteins.
Joyvio, a subsidiary of Chinese investment firm Legend Holdings, retails blueberries and kiwis from farms it acquired in China and Chile.

The fund will be managed by Z-Park River Capital, a Beijing-based private equity specializing in technology.

Alternative foods are gaining more attention, especially from developed countries as more consumers look for non-meat-based protein options due to concerns about animal welfare and the environment.

Betting the trend will grow and spread, SK Inc. has already invested in the business.

Nature's Fynd is best known for the production of Fy, a fungi protein.

Under the agreement with Joyvio, SK Inc. will seek opportunities to introduce alternative food businesses in China.
Another area of focus is to spot food tech start-ups specializing in vertical farms, a farming technique that grows crops in stacked layers.

SK Inc. said that it looks at British company Meatless Farm as the next investment target, but independent of the fund formed with Joyvio.

Founded in 2016, Meatless Farm has a strong standing in Europe with its plant-based meat products sourced from pea protein.

“The sustainable food market is considered having high-potential for growth and comes with its appeal for the environment,” said Kim Moo-hwan, executive vice president of SK Inc.'s Green Investment Center.

“We will continue to pave way for global expansion and mutually beneficial relations with partners and investors that own core technologies,” he said.