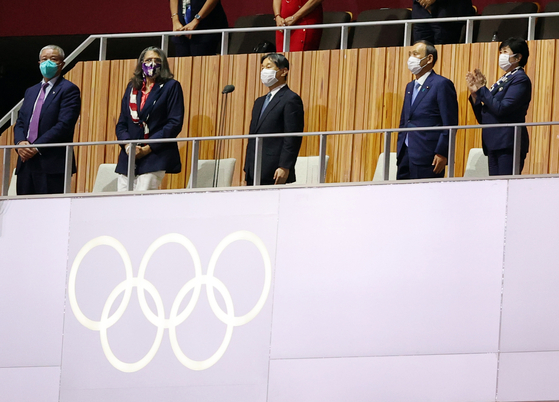 Japanese Emperor Naruhito, center, speaks at the opening ceremony of the Summer Games at the Olympic stadium in Shinjuku, Tokyo, Friday. [NEWS1]

The 10-minute meeting took place at the Olympic stadium near midnight, following the opening ceremony of the Summer Games, and came upon the request of the Japanese emperor.

Ban was said to have congratulated Japan for kicking off the Olympics, wishing for the success of the event, and the emperor in turn expressed his gratitude, according to the sources.

They also agreed on the need to improve relations between Korea and Japan amid deteriorated bilateral ties. Seoul and Tokyo face historical disputes stemming from Japan's 1910-45 colonial rule over Korea, namely the issues of forced labor and wartime sexual slavery. There has also been an ongoing trade spat after Japan's export restrictions on Korea since July 2019 and a territorial dispute over the Dokdo islets in the East Sea. 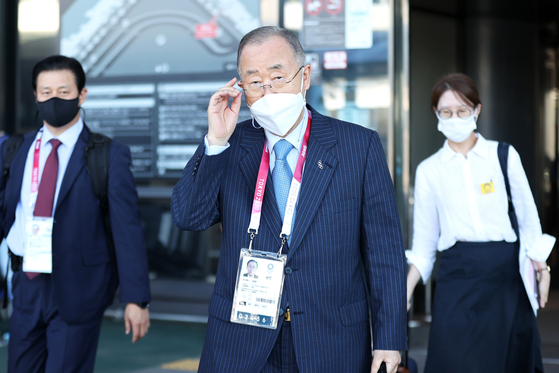 
Ban visited Tokyo from July 19 to Saturday to attend the opening ceremony as chair of the International Olympic Committee (IOC) Ethics Commission, a position he has held since 2017. He was re-elected to serve another four-year term last Tuesday.

Ban became acquainted with the emperor through past UN-related international conferences, including the World Water Forum.

Naruhito, who ascended the throne in 2019, studied water transportation at Oxford University in Britain and has shown lifelong interest in environmental issues such as water conservation.

As crown prince, he addressed the UN's special thematic session on water and disasters in November 2015 and met with then-UN chief Ban in New York. He served as an honorary president of the United Nations' Advisory Board on Water and Sanitation from 2007 to 2015.

Ban served as UN secretary general from 2007 to 2016 and, as an architect of the 2015 Paris Agreement, continues to be a strong advocate of combating global climate change. He currently serves as president and chair of the Seoul-based Global Green Growth Institute (GGGI).

Emperor Naruhito kicked off the Olympic Games Friday without using the word "celebrate" in his speech, as in the past, likely taking into consideration the global pandemic. There were only around 15 foreign dignitaries who attended the opening ceremony, including French President Emmanuel Macron and U.S. First Lady Jill Biden.

During his Japan trip, Ban watched the men's football match between Korea and New Zealand and met with the Taekwondo team and leaders of Korean-Japanese organizations.

The former UN chief's meeting with the emperor comes after efforts to arrange a first summit between President Moon Jae-in and Japanese Prime Minister Yoshihide Suga fell through.

Discussions to schedule a summit between Moon and Suga along the sidelines of the Tokyo Olympics had been ongoing till the last moment, but the Blue House confirmed a bilateral meeting was not happening on July 19.