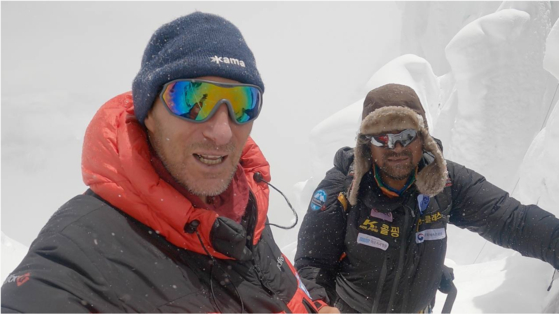 Vitaly Lazo, left, a Russian mountaineer and rescuer, in this photo taken with Kim Hong-bin, in what Lazo recalls was 10 minutes before Kim's possibly fatal fall. The photo was posted on Risk.ru in an account cited to have been written by Lazo. [VITALY LAZO]

A Russian who tried to rescue stranded Korean mountaineer Kim Hong-bin said at least 15 climbers passed by Kim without offering any help.

Kim, the first Korean mountaineer with a physical impairment to climb all 14 peaks of the Himalayan and Karakoram mountains more than 8,000 meters (26,250 feet) above sea level, fell down a crevasse while trying to descend the 14th, Broad Peak on the border of Pakistan and China, on July 18.

Russian mountaineer Vitaly Lazo reported on Risk.ru, a website with posts from mountaineers, that he and fellow rescuers received a report that same night that a Russian climber named Anastasia Runova had fallen through a crevasse on Broad Peak and needed help.

Although they did not know it at the time, Lazo said they found out later that Kim and Runova were, in fact, stranded on the same shelf of ice and snow.

Runova was rescued by around 4 a.m. on July 19 by porters, according to Lazo’s account, but Kim wasn't able to be rescued.

“I organized a safety station on the rock and went down to it on a rope. Kim was on a small shelf on a 70-degree wall,” Lazo wrote in Russian on the website. “Kim was very happy, but […] all the time repeating: ‘Very tired, very tired…’”

At this point, Kim was standing and conscious, and Lazo even took a photo with him on the shelf, which was posted on the website.

The two attempted to climb up, assisted by two porters, Lazo wrote. Using two ascenders, Lazo climbed up. They began to pull Kim out, using the ascenders and ropes on the wall, but one of the ropes used to pull Kim up failed in some way, and Kim fell farther down the crevasse, according to Lazo.

After recounting Kim’s fall, Lazo wrote about what he heard from Kim’s porter. Kim's porter had tried to rescue Kim from the shelf after rescuing Russian climber Runova a few hours earlier. But finding that he had no more strength to pull him up, he asked passing mountaineers for help -- and none responded.

"At least 15 people passed by him," Lazo wrote.


Adding that they could have at the least reported the accident through satellite communicators they had on hand, Lazo wrote, "In social networks you are crazy brave heroes, conquerors of the eight-thousanders, [but] I will say that you are pathetic [...] people who did not care about human life.”

Following a request from the Korean Foreign Ministry on July 19, the governments of Pakistan and China have been assisting in the search for Kim.

According to the Chinese Embassy in Korea, a helicopter-assisted search for Kim from the Chinese side, after a delay due to bad weather, set out last Thursday but was unable to locate him. Searches were reportedly joined by the Pakistani side later that day.

The latest helicopter-assisted search took place on Sunday, but found nothing, according to the Gwangju city government on Monday.

A hikers’ association in Gwangju sponsored Kim’s hike, and the international effort for Kim’s search has been coordinated by the association, city government and the foreign ministry.

Kim’s family on Monday called off the search.

“Kim had told his wife to make sure that if something should happen to him during the hike, that she doesn’t let other people get into trouble trying to search for him,” the city government said. “With a request from the family, the search will be called off.”

Kim’s funeral will be coordinated in the near future, the city government said.

“We are most grateful to the authorities in Pakistan and China for helping with the search,” it said.