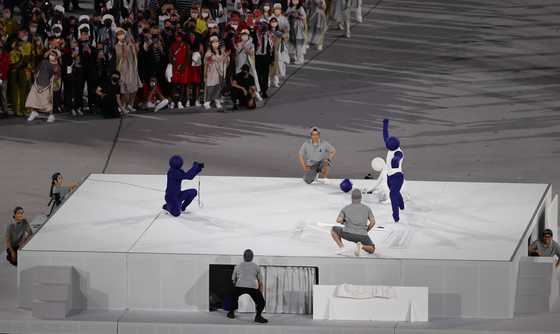 A pictogram-themed performance in the opening ceremony of the Tokyo Olympics. [JOINT PRESS CORPS]


Pictogram is a compound word combining picture and telegram. It was created to deliver information quickly through pictures without text. One of the most notable pictograms is the person running through an open door, depicting an emergency exit. This common picture is nothing special, but it is the international standard. The emergency exit pictogram was created after the Sennichi Department Store Fire, which killed 118 people in Osaka, Japan, in 1972.

Pictograms transcend language. Foreigners who don’t understand Korean won’t be confused about public restrooms. Pictograms are always found in public facilities such as airports. Anyone can immediately decipher a pictogram regardless of their language because it is based on the simplest part of the human cognitive structure.

The origins of pictograms are ideograms and hieroglyphs from thousands of years ago. The International Organization for Standardization (ISO) has selected some pictograms as international standards. The ISO 7000 defines pictograms used in various equipment such as automobiles, which include the high-beam and low-beam indicators used in all cars.

The pictograms symbolizing different sports in the Olympics first appeared in the 1948 London Olympics. Shooting is expressed with a target. It was modernized in the 1964 Tokyo Olympics. Yamashita Yoshiro and Kazumie Masaru created a pictogram for each sport based on simplified human figures. The simplicity in Japanese culture is considered to have upgraded Olympic pictograms. Various pictograms for sports are still made based on these designs.

For the 2004 Athens Games, Greece presented a set of pictograms based on the ancient Greek alphabet. China also showcased pictograms resembling ancient Chinese characters for the 2008 Beijing Olympics.

What attracted the attention of the world at the Tokyo Olympics opening ceremony on July 23 was a five-minute-long pictogram performance. It was a modern interpretation of the pictograms from the 1964 Olympics. It is considered to have lifted the mood of the opening ceremony that was gloomy with an absence of spectators.