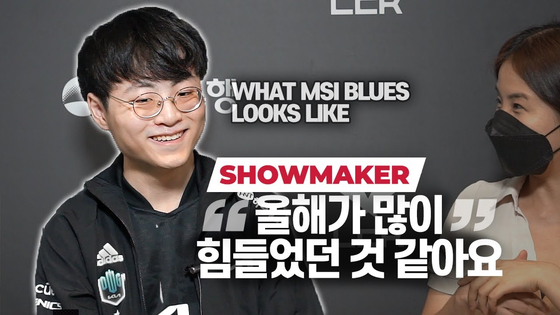 
After DWG KIA's 2-0 victory over DRX last Saturday, star mid laner Heo "ShowMaker" Su sat down for a chat in the LoL Park press area to discuss how he has been dealing with issues of burnout this year.


Q. DWG KIA had some off-days recently. What do you usually do during such breaks?

A. I just practice. I play League.

Q. Don't you find it boring, though? Do you still find League fun?

A. It is tiring. I do get weary, but on days like today, when I turn up on stage and win a match, then I feel somewhat compensated. That makes me work harder.


Q. How many hours do you spend in scrims and solo queue games per day?

A. For scrims, I think it's about eight to nine hours a day, if there's a night scrim slot. And I put the rest of my hours into solo queue. So when we have night scrims, solo queue would be for four or five hours. When we don't, it goes on for even longer.


Q. I spoke with some MAD Lions players and several of them told me that after returning from MSI, they no longer found League fun, and that it was a big part of why MAD faltered this summer. What's your take on this?

A. To be honest, I agree with them. I didn't want to admit it to myself, but ever since I came back from MSI, League hasn't been as fun to play. I just don't feel like playing sometimes. Maybe it's because we came so close to winning MSI but ended up taking second, and had to go through an insane fixture schedule for that.

Eventually I started feeling like I was forcing myself to play League, and I tried really hard to escape from that frame of mind. I tried reminding myself of my mindset when I had just been starting out. I tried grinding League like a madman. Then I tried taking a break from the game.

The symptom that I just described now, I'm not even sure if I should call it burnout... but in the end, it sort of resolved when we started playing at LoL Park once again. I found that I felt more motivated whenever I won here at the arena. It's more fun playing at the venue, you get an extra kick. It was a big difference from the spring split, when we had to play from home.


I've tried, and am trying, to keep only positive thoughts in mind.


Q. Have you ever experienced this symptom before in your career?

A. Not really, no. It's never been this difficult before. It's just been a really difficult year for me. To be honest. I was feeling a bit like this even in spring. Yes we won the league, but it wasn't as if we did so in dominant fashion, and we had a few internal issues going on, too. So I was already stressed then, and I guess it built up on and on until it all eventually surfaced in one go.


Q. ShowMaker, what does happiness look like for you?


A. I've been thinking about that myself. I've gone around asking other people the same. But I'm still not sure. To answer that, I feel like I'd need to take some time off and really think it through. My brain keeps telling me I want to take a break.

But we're in the middle of a season. So for now, I'll have to suppress it all and work hard, push on. Like I've said before, I'm trying hard to just stay positive.