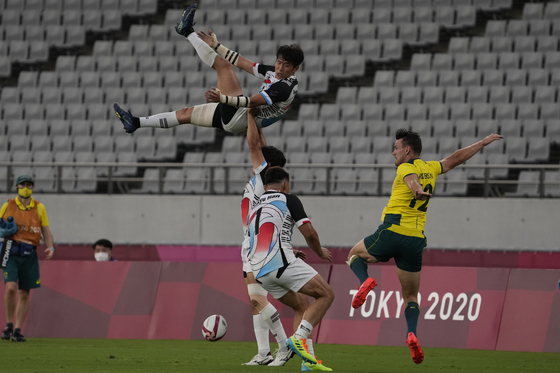 Korea's Jeong Yeon-sik is lifted in the air by teammate Lee Jink-yu during a lineout in a rugby sevens match against Australia at the 2020 Tokyo Olympics on Monday. [AP/YONHAP]


The Korean rugby sevens team lost their second game of the 2020 Tokyo Olympics 42-5 to Australia, once again managing to get a try across despite facing a considerably more experienced team.

Australia, the reigning Olympic champions, were always likely to win against the underdog Korean side, making their Olympic debut in Tokyo with very little international experience.

Earlier in the day, the rugby sevens team lost their first match at the 2020 Tokyo Games 50-5 to New Zealand, again scoring a single try to prove they can compete with the big teams, at least on some level.

That Korea managed to score a try against arguably the best team in the world is something of a surprise — at a pre-Olympic tournament last month, Korea dropped two games to Argentina without getting a single point on the board.

And what a try it was, with Jeong Yeon-sik breaking free down the right flank, jumping just out of reach of a New Zealand player and outpacing the squad, even managing to circle back around close to the posts.

Korea will next face Argentina at 10 a.m. on Tuesday.