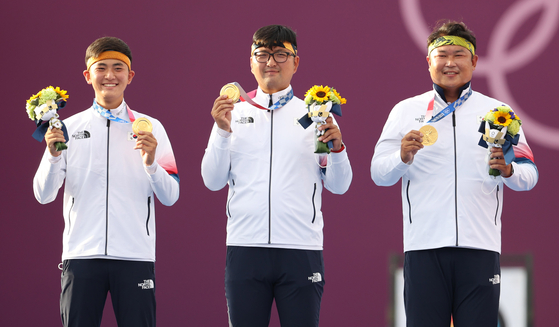 From left, Kim Je-deok, Kim Woo-jin and Oh Jin-hyek hold up their archery men's team gold medals on the podium on Monday at Yumenoshima Park Archery Field in Tokyo. [YONHAP]

Korea has swept all archery events so far, with all three gold medals coming from the sport. On Saturday, Korea won the mixed team gold, adding the women's team gold on Sunday.

On Monday, it was the turn of Kim Woo-jin, Kim Je-deok and Oh Jin-hyek, with 17-year-old Kim Je-deok claiming his second gold after the mixed event on Saturday.

After beating Japan in the semifinals in a dramatic shoot-off, Korea advanced to the finals to face Taiwan.

Kim Woo-jin started off the match shooting a 10, with Kim Je-deok following with a nine then Oh with another 10.

Taiwan's first shot was a nine, the second an eight and the third a 10.

Korea shot three more 10s, taking away the first set even before Taiwan had finished their last three shots.

In the second set, Taiwan started off stronger with a nine, a 10 and a nine. 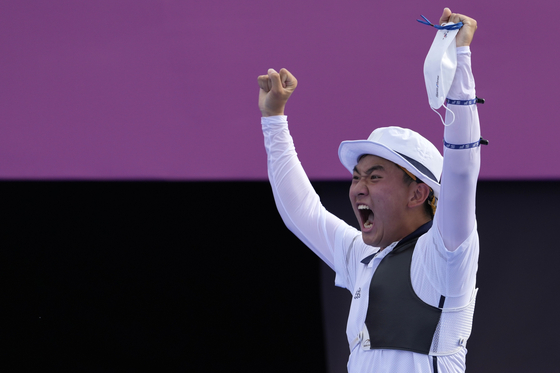 Kim Je-deok celebrates at the end of the men's team semifinal match against Japan at the 2020 Summer Olympics on Monday at Yumenoshima Park Archery Field in Tokyo. [AP/YONHAP]


Korea stepped up to do what not a lot of teams can do, shooting a perfect 60 to finish the second set with a flourish.

Having won the first and second sets, Korea was set to win the gold medal with just a tie in the third round.

Kim Woo-jin shot a nine, but Kim Je-deok shot a 10 and Oh shot a 10 to finish the match in straight sets.

"It's over," murmured Oh, right after he had shot the very last shot of the match and also likely the last Olympic shot of his career. 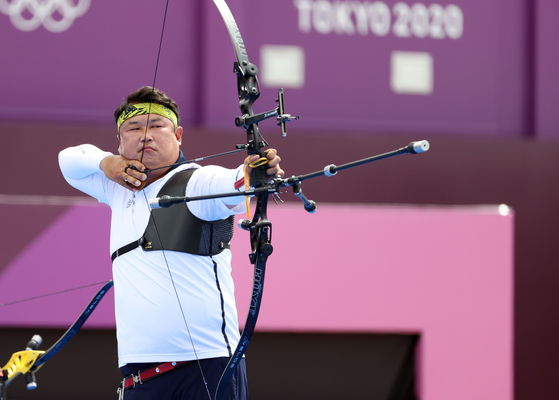 Oh Jin-hyek draws his bow back, aiming for the bull's eye at the men's team semifinal match against Japan at the 2020 Summer Olympics on Monday at Yumenoshima Park Archery Field in Tokyo. [ AP/YONHAP]


This is Korea's sixth gold in the men's team event since it was introduced at the 1988 Seoul Olympics.

For the Korean archers, winning a gold medal at the Olympics is practically a given. Korea has now claimed 26 of the 37 golds awarded in the sport since 1984.

Korea's dominance in archery has been credited to a number of things, including the long history of the weapon's use in the country and the adoption of the sport at a young age. The domestic competition is also a huge factor, with the contest to earn a spot on the Korean archery team often said to be the hardest tournament in the world.

Qualifying for the Korean team is notorious for its fierce but fair and transparent selection process. Being an Olympic medalist or being world No. 1 is of no use when it comes to qualifying for Team Korea. Its the five days of qualifiers that matter.

Kim Je-deok earned his spot on the national team after beating out Rio gold medalist Lee Seung-yun, and has become not only a two-time gold medalist but also the youngest Korean archer ever to win a medal.

The men's individual elimination round starts on Tuesday, with Kim Je-deok facing David Areneo of Malawi at 2:36 p.m. Kim Woo-jin will take on Matyas Laszlo Balogh of Hungary on Wednesday at 6:49 p.m. and Oh Jin-hyek faces Mohamed Hammed of Tunisia at 10:48 a.m. on Thursday.