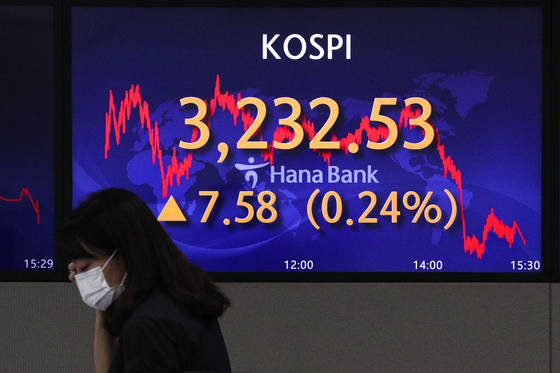 A screen in Hana Bank's trading room in central Seoul shows the Kospi closing at 3,232.53 points on Tuesday, up 7.58 points, or 0.24 percent, from the previous trading day. [NEWS1]


Stocks rebounded Tuesday as investor sentiment improved on optimism for strong corporate earnings despite the spreading new coronavirus pandemic. The won rose against the dollar.

Stocks rebounded after the Kospi closed down nearly 1 percent the previous session on market jitters about China's clampdown on education tech firms and its property market.

Local large caps continued to report robust earnings in the April-June period this week, signaling that Korea's economy is continuing to recover.

Korea's daily new coronavirus cases stayed in the 1,300s for the second day in a row Tuesday under the toughest virus curbs in the greater Seoul area.

Local stocks pared some of their earlier gains toward the session's end, ahead of the U.S. Federal Reserve meeting.

The local currency closed at 1,150.1 won to the dollar, down 4.9 won from the previous session's close.