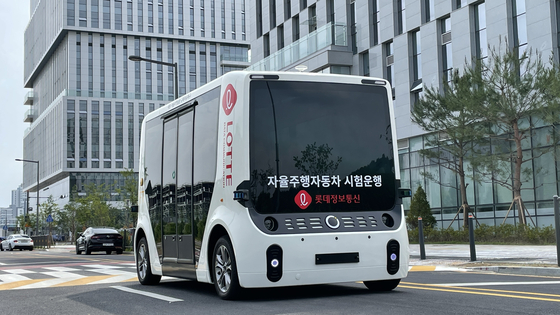 The government granted provisional approval for the trial operation of a Lotte Data Communication’s shuttle, above, in Sejong. [LOTTE GROUP]

Lotte Group held its biannual value creation meeting on July 1, to discuss business strategy for the latter half of the year with executives of the group’s companies.

“The future is not a mere extension of the past,” Lotte Group Chairman Shin Dong-bin said, urging employees to improve the company’s competitive edge and expand investments in future growth drivers, prioritizing high value-added businesses.

Lotte Chemical announced its hydrogen roadmap on July 13 dubbed “Every Step for H2,” pledging to achieve carbon neutrality and to supply 30 percent of domestic demand for hydrogen fuel by 2030.

The chemical arm of Lotte Group aims to become the hydrogen frontrunner in terms of production, distribution and technology development. Therefore, Lotte Chemical plans to invest some 4.4 trillion won ($3.8 billion) and generate about 3 trillion won in revenue, producing 600,000 tons of blue and green hydrogen and fully constructing a green hydrogen value chain by 2030.

Lotte Chemical will also take part in hydrogen distribution network construction, starting with a fuel cell power plant in Ulsan, South Gyeongsang, which is slated to begin operations in 2024.

Vying for technology leadership in hydrogen economy, the company will mass-produce 100,000 units of hydrogen storage tanks by 2025 and 500,000 units by 2030, while investing some 140 billion won in facility improvement to increase efficiency by reducing carbon emissions.

As the provisional approval will last five years, Lotte Data Communication plans to work hand in hand with the Korea Transport Institute to develop an autonomous driving system.