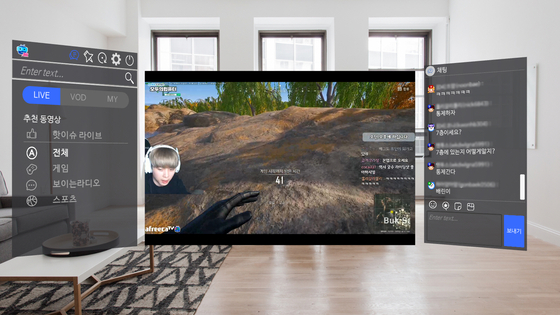 With the AR Player, viewers can place and size the video in the virtual space and watch them through their AR glasses. The app is currently compatible with LG U 's AR glass U Real Glass, but AfreecaTV says it aims to expand the service to other virtual reality (VR) and AR electronics in the future.

AfreecaTV says it is readying an app exclusively for the “Metaverse Week” VR esports competition that will take place in October.

“Metaverse Week” is an esports competition organized by AfreecaTV that will be held for the first time, which will see competitors face off in VR and AR games.

The competition will take place within the Afreeca Colosseum, located inside the Lotte World theme park in southern Seoul. AfreecaTV has set up 5G equipment to stream the games through the AR app.

The AR Player will livestream the esports games and display information about each player, including their previous records.

The AR Player is available for download on Google’s Play Store. It was released on July 23.