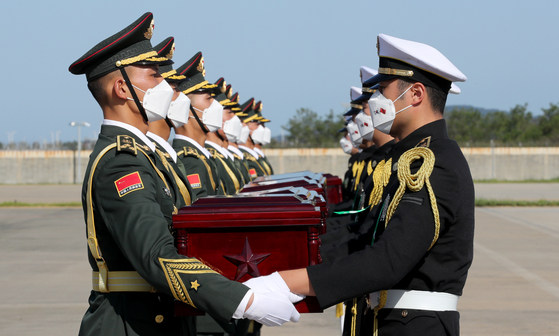 South Korean troops hand over remains of Chinese soldiers killed during the Korean War to their Chinese counterparts at Incheon International Airport in September last year. [MINISTRY OF NATIONAL DEFENSE]


Continuing an uninterrupted annual exercise of symbolic reconciliation after the 1950-53 Korean War, South Korea and China on Monday concluded working-level talks in Qingdao regarding the repatriation of the remains of Chinese troops killed during the conflict, the Defense Ministry said Tuesday.

At the meeting, the two sides signed an agreement to conduct what is now the eighth round of repatriations of the remains of People’s Liberation Army (PLA) soldiers killed in the Korean War.

Under the agreement, the two sides agreed to jointly hold a ceremony on Sept. 1 to hand over the remains of PLA troops to China the next day.

South Korea has thus far repatriated the remains of 716 Chinese troops from 2014 to last year over seven annual rounds of repatriations, which have proceeded despite high-level tensions between the two countries since 2016 over the South Korean government’s decision to green-light the installation of the U.S.-led Terminal High Altitude Area Defense (Thaad) antimissile system in South Korea and travel restrictions imposed by the Covid-19 pandemic.

According to the People’s Daily, the Chinese Communist Party’s official newspaper, on Tuesday, the two countries agreed on Monday, July 26 — the day before the anniversary of the signing of the Korean War armistice — to continue the next round of remains repatriations.

The repatriation of the remains of Chinese soldiers was first discussed during the administration of South Korean President Park Geun-hye during her state visit to China on June 29, 2013.

Park proposed remains repatriations to then-Vice Premier Liu Yandong. With China’s agreement, the first 437 remains were repatriated on March 28 the following year, with newly uncovered remains being sent to China annually since.

South Korea most recently sent back 117 remains last September, which were received in a solemn ceremony upon their arrival in Shenyang, northern China.

The two countries have conducted the repatriations as yearly humanitarian and diplomatic gestures, according to the People’s Daily. Chinese television began broadcasting the transfers in 2019.

During the war, China backed communist North Korea against the U.S.-led United Nations military force which defended South Korea. China entered the war as United Nations forces approached the Yalu River, which demarcates the border between China and North Korea.

A total of 2.97 million Chinese soldiers were deployed to Korea over a two-and-a-half-year period and succeeded in pushing the U.S.-led allies back to the center of the peninsula, which led up to a stalemate.

While the Korean War is described as a victory over U.S. aggression in China, the number of casualties incurred by the country remains a sensitive issue, with the Chinese government reporting much lower numbers than those estimated by Western sources.

Popular South Korean boy band BTS faced backlash from Chinese fans in October after band leader RM thanked U.S. and South Korean troops for their "sacrifices" during the war. Chinese fans were upset that he had not properly acknowledged the sacrifices of Chinese soldiers, despite being on the opposing side in the conflict.